The current study examined relational aggression as a potential mechanism that explains the association between off-time pubertal development and internalizing problems in youth. Youth gender was also examined as a moderator for the association between these variables. It was hypothesized that early pubertal maturation would be associated with higher levels of relationally aggressive behavior which, in turn, would be associated with elevated levels of internalizing problems. Parents of 372 children between the ages of 8 and 17 were recruited through Amazon’s Mechanical Turk. Parents responded to demographic information about themselves, as well as information about their child’s pubertal timing, relationally aggressive behavior, and anxiety and depressive symptoms. Findings indicated that early pubertal timing was associated with higher levels of anxiety directly, and higher levels of both anxiety and depressive symptoms indirectly through higher levels of relational aggression. In all but one of the pathways examined, gender was not found to moderate the associations between the study variables of interest. This study is the first to examine relational aggression as a mechanism by which early pubertal timing leads to internalizing problems. The findings suggest that relational aggression could be a target for intervention among early developing youth who are at risk for internalizing problems. 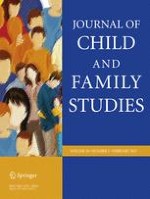 Sit Down and Play: A Preventive Primary Care-Based Program to Enhance Parenting Practices