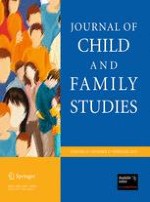 Family Environment in Inner-City African-American and Latino Parents/Caregivers: A Comparison of the Reliability of Instruments