The nature of the co-occurrence of chronic tic disorders (CTD) and attention deficit hyperactivity disorder (ADHD) is unclear. Especially in the field of psychopathology, the relationship of CTD and ADHD remains to be clarified. Thus, the aim of the present chart review study was to specify the contribution of CTD and/or ADHD to the psychopathological profile of the comorbid group (CTD+ADHD). The psychopathological profiles of four large groups (CTD-only (n=112), CTD+ADHD (n=82), ADHD-only (n=129), controls (n=144)) were measured by the eight subscales of the Child Behavior Checklist (CBCL) and analyzed by a 2×2 factorial design followed by contrasts. There were main effects of ADHD diagnosis on all but one subscale of the CBCL (Somatic Complaints). For CTD diagnosis, main effects were found for Attention Problems, Anxious/Depressed, Thought Problems, Social Problems and Somatic Complaints. The only interaction effect was seen for Somatic Complaints. While CTD and ADHD were both related to internalizing psychopathology of children in the CTD+ADHD group, ADHD had the largest effect on externalizing psychopathology in the comorbid group. At the level of psychopathology, an additive model for the co-occurrence of CTD and ADHD is strongly supported. In the comorbid group (CTD+ADHD), the ADHD diagnosis shows the strongest relation to externalizing psychopathology.
vorige artikel Development of Social Anxiety: Social Interaction Predictors of Implicit and Explicit Fear of Negative Evaluation
volgende artikel Sex Differences in the Pathway from Low Birth Weight to Inattention/hyperactivity 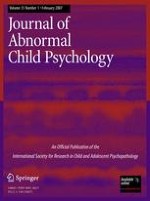 Is Theory of Mind Understanding Impaired in Males with Fragile X Syndrome?