To evaluate the psychometric properties of the Chinese Mandarin version of the Medical Outcomes Study Social Support Survey (MOS-SSS-CM) in patients with coronary heart disease (CHD) in mainland China.

Measurement performance of the MOS-SSS-CM was tested on a convenience sample of 200 Chinese patients with CHD in a University-affiliated hospital in Xi’an, P. R. China. To establish reliability of the instrument, 40 patients were retested 2 weeks later through telephone interview. The traditional Chinese version of the MOS-SSS was transformed into a simplified Chinese Mandarin version and administered to participants, together with Chinese Mandarin versions of the Short Form-36 item Health Survey (SF-36) and the Hospital Anxiety and Depression Scale (HADS).

The MOS-SSS-CM is a valid and reliable measure for Chinese Mandarin-speaking patients with CHD. 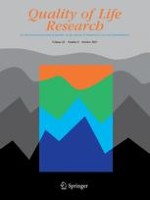 Empirically driven definitions of “good,” “moderate,” and “poor” levels of functioning in the treatment of schizophrenia

Psychometric and factor analytic evaluation of the 15D health-related quality of life instrument: the case of Greece

A prospective examination of the impact of a supported employment program and employment on health-related quality of life, handicap, and disability among Veterans with SCI