Although anxiety is frequently reported in children with autism spectrum disorder (ASD), existing anxiety scales are often psychometrically inappropriate for this population. This study examined the internal structure, reliability, convergent and discriminant validity of the Spence Children’s Anxiety Scale-Parent Report (SCAS-P; Spence 1999) in 238 school-aged children with ASD. While confirmatory factor analysis did not support the original six-correlated-factor structure, structural support as well as acceptable internal consistency and convergent validity was found for Generalized Anxiety, Separation Anxiety, Panic, and Agoraphobia subscales. Use of the SCAS-P in its original form for assessment in children with ASD was not supported. However, four subscales showed viability, and may benefit re-analyses of existing SCAS-P data and future scale adaptations for research and clinical purposes. 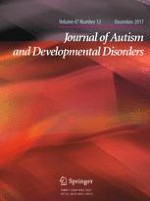 No Offense Intended: Fear of Negative Evaluation in Adolescents and Adults with Autism Spectrum Disorder

Are Generalized Anxiety and Depression Symptoms Associated with Social Competence in Children with and without Autism Spectrum Disorder?

Towards a Treatment for Intolerance of Uncertainty in Young People with Autism Spectrum Disorder: Development of the Coping with Uncertainty in Everyday Situations (CUES©) Programme

Brief Report: Postsecondary Work and Educational Disruptions for Youth on the Autism Spectrum