To evaluate the psychometric properties of the Mandarin Chinese version of KIDSCREEN-52 health-related quality of life (HRQOL) questionnaire.

The response rates of both baseline and test–retest surveys were more than 90%. Low missing values were found (0.02–1.92%) across ten dimensions. The measurement properties of items were satisfactory. Noteworthy ceiling effects were observed for ten dimensions (6.75–31.84%), while the observed floor effects were negligible (0.02–1.37%). Internal consistency was robust with Cronbach’s alpha (0.819–0.959), while the test–retest reliability was acceptable with the ICCs (0.724–0.849). Confirmatory factor analysis confirmed the ten-dimensional structure and supported the configural and metric invariance across gender and age groups. The Pearson correlation coefficients between the KIDSCREEN-52 and the PedsQL™ 4.0 were stronger in comparable dimensions than those in less comparable dimensions, demonstrating the convergent and discriminant validity. In most dimensions, statistically significant and medium or large effect size differences were found across socioeconomic and mental health status, supporting the known-group validity.

These findings demonstrate that the Mandarin Chinese version of KIDSCREEN-52 seems to work well in a Chinese context, and is a psychometrically valid and reliable HRQOL instrument.
vorige artikel Development and validation of the caregiver roles and responsibilities scale in cancer caregivers
volgende artikel Nonrestorative sleep scale: reliable and valid for the Chinese population 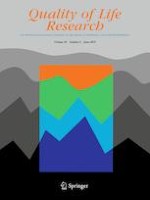 Health-related quality of life among children, adolescents, and adults with bladder exstrophy–epispadias complex: a systematic review of the literature and recommendations for future research

Advancing the use of patient-reported outcomes in practice: understanding challenges, opportunities, and the potential of health information technology