Due to the problem of high ceiling effects of the EQ-5D-3L, the EQ-5D-5L was developed. However, little was known about the full psychometric properties of the EQ-5D-5L. Thus, this study aimed to evaluate its practicality, reliability, validity, and responsiveness in Thai patients with chronic diseases.

One thousand one hundred and fifty-six adults taking a medicine at least 3 months were identified from three university hospitals in Bangkok, Thailand, between July 2014 and March 2015. Practicality was evaluated by administration times and ceiling effects. Test–retest reliability was assessed using weighted kappa and intraclass correlation coefficients (ICCs). Validity was tested with correlations between the EQ-5D-5L and WHOQoL-BREF and SF-12v2, and known-groups validity. Responsiveness was measured with standardized effect sizes (SES). 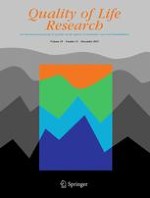