To determine the psychometric properties and performance of Malay and English versions of the EQ-5D-5L descriptive instrument in the general Malaysian population.

1137 members of the Malaysian general public were sampled in this national study. Respondents were recruited by quota sampling of urbanicity, gender, age, and ethnicity. In face-to-face interviews, respondents first answered the EQ-5D-5L questionnaire administered using the EQ-Valuation Technology software, and then completed the EQ-5D-3L questionnaire on paper. A subgroup of the respondents were given paper form of EQ-5D-5L for completion within 2 weeks for test–retest reliability. Ceiling effects, response redistribution, informativity, and convergent validity were compared between EQ-5D-5L and ED-5D-3L separately by Malay and English language versions.

The proportion of ‘full health’ responses (11111) drastically decreased by 25.55% and 15.74% in the Malay and English language versions indicating lower ceiling effects in EQ-5D-5L. Inconsistencies from response redistribution was below 6% for all dimensions across languages. The measure of relative informativity was comparatively higher in EQ-5D-5L than in EQ-5D-3L in both language versions, with the exception of dimensions mobility and pain/discomfort in the English version. Convergent validity in terms of correlation with EQ-VAS was relatively better for EQ-5D-5L dimensions, with pain/discomfort of the Malay version having the strongest correlation (|r| = 0.37). Also, reliability testing revealed moderate to poor agreements on all 5L dimensions.

EQ-5D-5L fared better in terms of psychometric performance compared to EQ-5D-3L for both language versions. This encourages the application of the EQ-5D-5L in health-related research in Malaysia. 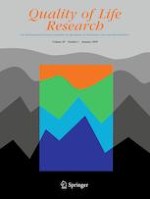 Effects of caregiver-involved interventions on the quality of life of children and adolescents with chronic conditions and their caregivers: a systematic review and meta-analysis

Health-related quality of life in people with advanced dementia: a comparison of EQ-5D-5L and QUALID instruments

Changes and determinants of health-related quality of life among people newly diagnosed with HIV in China: a 1-year follow-up study