Mindfulness is derived from Eastern and Buddhist traditions and is associated with the improvement of psychological well-being (WB). However, many empirical approaches designed to measure dispositional mindfulness and WB have been developed and validated within Western and non-Buddhist cultural contexts. Here, we sought to investigate the structure of dispositional mindfulness and WB in the Kingdom of Bhutan, a country characterized by an Eastern, Buddhist cultural context.

Self-report data were collected using the Five Facets of Mindfulness Questionnaire (FFMQ) and standardized WB (hedonic and eudaimonic) measures in Bhutan and in the USA. Data were subjected to a series of confirmatory factor analyses (CFA) to examine the factor structure of each measure in both samples.

For the FFMQ, we found that a four-factor correlated model (excluding the observe facet) best fit the sample data in Bhutan and in the USA. For WB, we did not observe a clear distinction in terms of goodness of fit indices between the one- and two-factor hierarchical models. We did observe that across both samples, the hedonia and eudaimonia WB factors were highly correlated with one another suggesting that a one-factor solution may be optimal. Multigroup CFA analysis demonstrated that while the majority of models displayed adequate configural invariance, the only model displaying adequate metric invariance was the hierarchical four-factor model of the FFMQ data.

These findings suggest that the way mindfulness and WB are conceptualized in a country characterized by an Eastern and Buddhist cultural context is different than in the USA.
vorige artikel Mindfulness-Based Stress Reduction with Individuals Who Have Rheumatoid Arthritis: Evaluating Depression and Anxiety as Mediators of Change in Disease Activity
volgende artikel Effect of Acceptance Versus Attention on Pain Tolerance: Dissecting Two Components of Mindfulness

Titel
Psychometric Investigation of the Five Facets of Mindfulness and Well-Being Measures in the Kingdom of Bhutan and the USA
Auteurs
Brian W. Haas
Yoshio Akamatsu 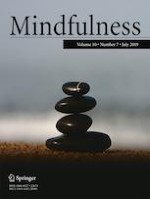 Is Self-Compassion Related to Behavioural, Clinical and Emotional Outcomes in Adults with Diabetes? Results from the Second Diabetes MILES—Australia (MILES-2) Study