Onset of anxiety and depression often occurs in adolescence [ 1– 3], and episodes of these disorders are likely to persist into adulthood and account for subsequent manifestations of psychosocial and health adversities [ 4– 7]. Yet, many youths suffering from anxiety and depression were left unidentified, and only a small proportion has received mental health care [ 8– 10]. This may be attributable in part to the lack of a suitable instrument that could be used in community and school settings to screen for anxiety and depressive symptoms in adolescents. Therefore, a brief and feasible self-rated screener that can be administered easily is essential to assist with service referral and further in-depth assessment and aid for intervention and prevention efforts.
The Hospital Anxiety and Depression Scale (HADS) is a 14-item self-administered instrument developed by Zigmond and Snaith [ 11] to measure anxiety and depression symptomatology. During the past decades, the HADS has been extensively validated in a variety of adult populations, including clinical and community samples, with well-documented good measurement properties. The good reliability and stability of the HADS were also demonstrated in various translated versions across culturally diverse groups [e.g., 12– 20]. However, its usefulness in adolescents remains under-researched. To our knowledge, there have been only two studies that addressed this issue [ 21, 22]. Furthermore, there have been mixed results in adult studies that support the factor structure in the HADS that underpins the clinical significance of assessing anxiety and depression as two distinct dimensions [ 13, 16, 20, 23– 28]. For example, several studies reported a tri-dimensional structure in the HADS [ 13, 16, 23– 26]. While White et al. [ 22] reported acceptable validity and two underlying factors for use with adolescents, further examination is needed. Additionally, although the validation of the Chinese version was reported in several adult studies [ 15, 16, 20, 26], its psychometric properties in adolescents have not been examined. Thus, the current study sought to assess the usefulness of the HADS by examining its internal reliability, concurrent validity, and factor structure using a large community sample of adolescents in Hong Kong.

Data were derived from a baseline survey as part of a multi-wave school-based survey on the development of high risk behaviors among secondary school youths in Hong Kong. Seventeen schools were selected, each representing a juridical district in Hong Kong except for the schools in the outlying islands. The self-reported baseline questionnaire survey was conducted during the second half of 2004 and early 2005.
After obtaining written informed consent from both students and their parents, students were instructed to complete the questionnaire. The survey was conducted by a trained research assistant in a classroom setting with no teachers present. Students were assured that teachers and school principals had no access to their responses and data were kept strictly confidential and used only for research purposes. Students who could not speak and read Chinese were excluded. Of the 6,926 questionnaires collected (86% consent rate), 875 were invalid, 82 did not provide age information or were out of the target age range (age 10–19), and 112 did not complete the information on the HADS. As such, the sample for the current study comprised 5,857 adolescents. Among them, 55.4% were females, and the average age was 13.4 years (standard deviation (SD) = 1.2) with distribution as follows: age 10–11 (0.2%), age 12 (23.4%), age 13 (31.9%), age 14 (27.9%), age 15 (12%), age 16 (3.3%), and age 17–19 (1.3%). In particular, 41.8% were in the 7th grade, 34.8% in the 8th grade, and 23.4% in the 9th grade. Most youths lived with both parents (90%). Approximately 75 and 81% reported their father’s and mother’s education was equal to or beyond a high school degree, respectively. The study was approved by the Institutional Review Board of the University of Hong Kong.

The HADS was designed to measure the presence and the severity of anxiety and depression states, with seven items for each. Throughout the scale, the items were alternated subsequently for anxiety and depression. Participants were asked to complete the scale by rating how they have felt on the basis of symptoms that had occurred in the preceding week using a 4-point scale, ranging from 0 to 3 (0: absence of symptoms, 3: severe symptoms). The items were recoded according to the respective scoring algorithms; higher scores indicate more severe anxiety and depressive symptoms, with possible scores for anxiety and depression each ranging from 0 to 21 and for a full scale, ranging from 0 to 42. It is worth noting that the HADS was designed to minimize the symptoms that might be ascribed to somatic disorders such as dizziness, insomnia, and fatigue; hence, the instrument could be used in a non-psychiatric setting [ 11]. The current study used the Chinese-translated version; its norm and validation were previously reported using an adult sample [ 26].

The HADS was evaluated in terms of its reliability, concurrent validity, and factor-analytic structure. Cronbach’s alpha coefficient was used for assessing the internal consistency and Pearson’s correlation coefficient for examining the interrelationships of subscales. An alpha value of greater than 0.7 was considered a criterion of good reliability [ 29]. To evaluate the concurrent validity, we first examined the relationship of suicidal thought with the HADS because prior studies have documented a strong association between psychological distress and suicide in adolescents [ 30, 31]. Four items assessing suicidal thought that had occurred in the past week were administered with a frequency rating of 1: never, 2: few, 3: sometimes, and 4: often. We hypothesized that there would be a positive correlation between intensity of suicidal thought and both HADS anxiety and depression scores. We further examined the concurrent validity of the HADS with the widely applied Youth Self Report (YSR) Anxious/Depressed subscale [ 32]. The validation of the YSR in Chinese adolescents has previously shown satisfactory test–retest reliability and criterion validity in assessing internalizing problems [ 33]. We posited a positive correlation between the HADS and the YSR Anxious/Depressed subscale. Gender difference in the correlations of the HADS with suicidal thought and YSR Anxious/Depression was tested by applying a Fisher r-to-z transformation to the observed Pearson’s correlations [ 34].
We performed confirmatory factor analysis on the variance–covariance matrix of the HADS items, using Satorra and Bentler’s robust maximum likelihood estimation procedure [ 35], to compare different factor structure models, which have shown good measurement properties in prior studies. The models found in adult samples were: the original two-factor model of Zigmond and Snaith [ 11], the two-factor model of Moorey et al. [ 27], the single-factor model of Razavi et al. [ 28], and the three-factor models of Caci et al. [ 13], Dunbar et al. [ 24], and Friedman et al. [ 25], as well as White et al.’s [ 22] replication of Moorey et al.’s [ 27] model in adolescents. The fit to the model was analyzed using global indices including the robust comparative fit index (R-CFI) [ 36], the goodness of fit index (GFI), standardized root mean squared residuals (SRMR) [ 37], and the robust root mean squared error of approximation (R-RMSEA) [ 38]. An R-CFI greater than 0.9, a GFI greater than 0.9, and both SRMR and R-RMSEA less than 0.08 suggested a good fit to the data [ 36– 39]. The goodness of fit indices were used to compare the models tested. To test the stability of the resulting factor structure after identifying the most parsimonious model, we performed a cross-validation test by gender, split-half samples, and age subgroups. As the majority of our participants were in an age range of 12 to 14 years, stratification by age was made primarily based on the balance of sample size across subgroups. The four age subgroups were age 10–12 ( n = 1,381), age 13 ( n = 1,870), age 14 ( n = 1,635), and age 15–19 ( n = 971).Statistical analysis was completed using STATA version 9 and the EQS version 6.1 packages.

Factor structure of the HADS

Examination of the fit indices indicated that Moorey et al.’s [ 27] two-factor model fit the data best (R-CFI = 0.906, SRMR = 0.049, R-RMSEA = 0.052), although Zigmond and Snaith’s two-factor model [ 11], and Caci et al.’s [ 13] and Dunbar et al.’s [ 24] three-factor models also provided acceptable fits to the data (Table  3). A poor fit to the data was obtained from Razavi’s [ 28] single-factor model. The examination of fitting to Friedman et al.’s model [ 25] appears to be a Heywood case [ 40], which indicates that the model did not fit to our data. Consequently, Moorey et al.’s [ 27] two-factor model with the original anxiety item 7, “I can sit at ease and feel relaxed,” loading on the depression subscale was fitted to the data for a cross-validation test. As shown in Table  4, overall, the findings revealed an acceptable fit of Moorey’s two-factor model for males, females, split-halves, and age groups. Although the R-CFI for group of age 14 (R-CFI = 0.876) was slightly below the adequate fit for this single criterion, its other fit indices were above the acceptable criteria (GFI = 0.940, SRMR = 0.057, R-RMSEA = 0.058). Using the revised two factors, i.e., 6 items for the anxiety subscale and 8 items for the depression subscale, the Cronbach’s alpha for the overall sample was 0.79 for the anxiety subscale and 0.67 for the depression subscale.
Table 3
Comparison of different models using total sample ( n = 5,857)
Table 4
Cross-validation on Moorey’s two-factor model
Table  5 summarizes the standardized factor loading estimates for total, male, female, split-half samples, and age groups using the revised two factors. All items were positively and significantly loaded on their designated factor with all factor loadings greater than 0.4, except for item 10, “I have lost interest in my appearance”, on the depression subscale. The lowest factor loading (value of 0.28) of this item appeared to be in the older-aged youth group (age 15–19), followed by a loading value of 0.3 in females. While the factor loadings of depression items were less distinctive when compared to those of anxiety items, overall, the loading magnitude for both subscales indicated that most of the items were good measures of the respective factors. A positive factor correlation was observed in a range of 0.69 to 0.74 across subgroups.
Table 5
Standardized factor loadings based on Moorey’s two-factor model for the HADS items by total sample, male, female, split-half, and age subgroups
ANX anxiety, DEP depression

The study was supported by the funding of University of Hong Kong Seed Fund Grant (YF Chan) and RGC CERG scheme (HKU 7435/03M, AM Lee). The authors wish to thank Jeanette Lancaster and Joan Unsicker for reviewing the manuscript and Stephanie Merkle for assisting with manuscript formatting. 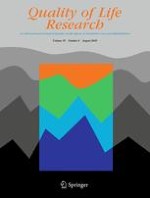 Health-related quality of life and disability in patients with rheumatoid, early rheumatoid and early psoriatic arthritis treated with etanercept

Diabetes and its impact on health-related quality of life: a life table analysis

Development and psychometric evaluation of the Endometriosis Treatment Satisfaction Questionnaire