Psychometric Analysis of the Social Communication Questionnaire Using an Item-Response Theory Framework: Implications for the Use of the Lifetime and Current Forms | mijn-bsl Skip to main content
ZOEKEN MENU 1 2 3 4

The Social Communication Questionnaire (SCQ) was developed as a screener of Autism Spectrum Disorder (ASD). To date, the majority of the SCQ utility studies focused on its external validity (e.g., ROC curve analyses), but very few have addressed the internal validity issues. With samples consisting of 2,134 individuals available from the National Database for Autism Research (NDAR), the current study examined the factor structure, item-level characteristics, and measurement equivalence of the SCQ forms (i.e., Lifetime form and Current form) using both the classical true score theory and the Item Response Theory (IRT). While our findings indicate sufficient psychometric properties of the SCQ Lifetime form, measurement issues emerged with respect to the SCQ Current form. These issues include lower internal consistencies, a weaker factor structure, lower item discriminations, significant pseudo-guessing effects, and subscale-level measurement bias. Thus, we caution researchers and clinicians about the use of the SCQ Current form. In particular, it seems inappropriate to use the Current form as an alternative to the Lifetime form among children younger than 5 years old or under other special situations (e.g., teacher-report data), although such practices were advised by the publisher of the SCQ. Instead, we recommend modifying the wording of the Lifetime form items rather than switching to the Current form where a 3-month timeframe is specified for responding to SCQ items. Future studies may consider investigating the association between the temporality of certain behaviors and the individual’s potential for being diagnosed with ASD, as well as the age neutrality of the SCQ.
vorige artikel Identifying Shared Latent Dimensions of Psychological Symptoms: Implications for the Psychological Correlates of Smoking
volgende artikel Standardized Screening for Mental Health Needs of Detained Youths from Various Ethnic Origins: The Dutch Massachusetts Youth Screening Instrument-Second Version (MAYSI-2) 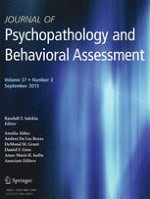