Whether intrauterine cocaine exposure (IUCE) explains unique variance in psychiatric functioning among school age children, even after controlling for other biological and social risk factors, has not been fully delineated. As part of a longitudinal birth cohort study of children with and without IUCE, we conducted and analyzed data based on structured clinical interviews with 105 children (57 % male) and their caregivers when the child was approximately 8.5 years old; 47 % of the children had experienced IUCE. Interviews included past and current major psychological disorders and sub-threshold mental health symptoms. Potential covariates were ascertained by interviews of birth mothers and other caregivers from shortly after the child’s birth until the 8.5-year visit. More than one-third of children met DSM-IV criteria for one or more mood, anxiety, attention deficit, or disruptive behavior disorders. IUCE was not significantly associated with children’s history of psychological distress, in either bivariate or multiple logistic regressions. In contrast, birth mothers’ acknowledgement of greater psychiatric distress at baseline and higher levels of alcohol consumption during pregnancy, and at 8.5 years caregivers’ reports of their own psychological distress, and children’s lower IQ were predictors of higher rates of psychological morbidity. Findings are consistent with prior reports suggesting that, regardless of IUCE status, children from low-income, urban backgrounds are at heightened risk for psychological distress. Results underscore the need for closer monitoring of the mental health of children living in low-income households, with or without intrauterine substance exposures, to facilitate access to appropriate services.
vorige artikel Peer Victimization and Forms of Aggression During Middle Childhood: The Role of Emotion Regulation
volgende artikel Parenting Stress of Parents of Adolescents with Attention-Deficit Hyperactivity Disorder 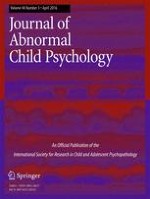 Parenting Stress of Parents of Adolescents with Attention-Deficit Hyperactivity Disorder