The general aim of this study was to examine the relation of psychiatric symptom-induced impairment with other common parameters of mental health in children with autism spectrum disorder (ASD). Prevalence rates are used to illustrate the implications of different criteria for caseness. Parents/teachers completed DSM-IV-referenced rating scales for 6–12 year old children with ASD (N = 115), the majority of whom were boys (86 %). Most children were rated by parents (81 %) or teachers (86 %) as being socially or academically impaired by symptoms of at least one psychiatric disorder. The most common impairing conditions (parent/teacher) were attention-deficit/hyperactivity disorder (67 %/71 %), oppositional defiant disorder (35 %/33 %), and anxiety disorder (47 %/34 %), and the combined rates based on either informant were generally much higher. Agreement between symptom cutoff and impairment cutoff was acceptable for most disorders. A larger percentage of youth were impaired by psychiatric symptoms than met symptom cutoff criteria, and the discrepancy between impairment cutoff and clinical cutoff (impairment cutoff plus symptom cutoff) was even greater. Impairment was moderately to highly correlated with both number and severity of symptoms. Parents’ and teachers’ ratings indicated little agreement as to whether a child was impaired. Findings for youth with ASD were similar to non ASD child psychiatry outpatient referrals, but clearly different in several ways from comparable studies of community-based samples.
vorige artikel Personality Dimensions as Common and Broadband-Specific Features for Internalizing and Externalizing Disorders
volgende artikel Discrepancies Between Parent and Adolescent Beliefs About Daily Life Topics and Performance on an Emotion Recognition Task 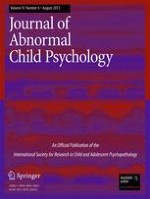