This study examined predictors of psychiatric hospitalization among children with autism spectrum disorders (ASD). Data were collected from 760 caregivers of children with ASD. Cox regression was used to determine factors associated with hospitalization. Almost 11% were hospitalized. Youth in single parent homes were more likely to be hospitalized (OR = 2.54), as were youth diagnosed at a later age (OR = 1.10). Engaging in self-injurious behavior (OR = 2.14), aggressive behavior (OR = 4.83), and being diagnosed with depression (OR = 2.48) or obsessive compulsive disorder (OR = 2.35) increased the odds of hospitalization. Risk for hospitalization increased with age and over time. The results suggest early diagnosis and community-based interventions for aggressive and self-injurious behaviors may reduce hospitalizations.
vorige artikel Birthday and Non-birthday Videotapes: The Importance of Context for the Behavior of Young Children with Autism
volgende artikel Intestinal Permeability and Glucagon-like peptide-2 in Children with Autism: A Controlled Pilot Study 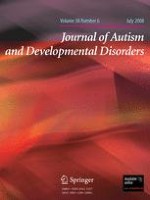 Brief Report: Development and Initial Testing of a Questionnaire Version of the Environmental Rating Scale (ERS) for Assessment of Residential Programs for Individuals with Autism

Sex-typical Play: Masculinization/Defeminization in Girls with an Autism Spectrum Condition