To systematically examine the patterns of psychiatric comorbidity and functioning in clinically referred adults with autism spectrum disorders (ASD). Psychiatrically referred adults with and without ASD were compared on measures assessing for psychiatric comorbidity and psychosocial functioning. Sixty-three adults with ASD participated in the study (mean age: 29 ± 11 years). Adults with ASD in their lifetime suffered from a higher burden of psychiatric disorders (6 ± 3.4 vs. 3.5 ± 2.7; p < 0.001) including major depressive disorder and multiple anxiety disorders, and were functionally more impaired with a significant proportion having received both counseling and pharmacotherapy. Adults with ASD have high levels of psychiatric comorbidity and dysfunction comparable to a clinically referred population of adults without ASD.
vorige artikel Epilepsy in Individuals with a History of Asperger’s Syndrome: A Danish Nationwide Register-Based Cohort Study
volgende artikel What Do Repetitive and Stereotyped Movements Mean for Infant Siblings of Children with Autism Spectrum Disorders? 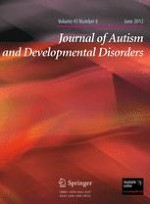