Quality of life (QOL) is a key outcome for people with cerebral palsy (CP), and executive functioning is an important predictor of QOL in other health-related conditions. Little is known about this association in CP or about its neural substrate. We aim to analyze the influence of executive functioning (including cognitive flexibility) as well as that of other psychological, motor, communication and socioeconomic variables on QOL and to identify neuroanatomical areas related to QOL in adolescents and adults with CP.

Executive functions predict scores in four domains of CP QOL (General well-being and participation, Communication and physical health, Family health and Feelings about functioning) in the regression model. Among the cognitive domains that comprise executive function, only cognitive flexibility measured in terms of performance on the Wisconsin card sorting test (WCST) predicts the CP QOL total score. Monthly income, fine motor functioning and communication ability predict scores on the domains Access to services and Family Health, Feelings about functioning and School well-being, respectively. The clusters resulting from the correlation between cortical thickness and both CP QOL total score and WCST performance overlapped in the posterior cingulate and precuneus cortices. 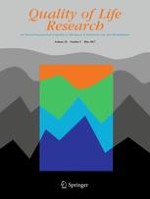 The impact of living arrangements on quality of life among Korean elderly: findings from the Korean Longitudinal Study of Aging (2006–2012)

Condition-specific or generic preference-based measures in oncology? A comparison of the EORTC-8D and the EQ-5D-3L

Neonatal risk mortality scores as predictors for health-related quality of life of infants treated in NICU: a prospective cross-sectional study