To prospectively assess changes in health-related quality of life (HRQOL) over 10 years, by age and sex, and to compare measured within-person change to estimates of change based on cross-sectional data.

Participants in the Canadian Multicentre Osteoporosis Study completed the 36-item short form (SF-36) in 1995/1997 and 2005/2007. Mean within-person changes for domain and summary components were calculated for men and women separately, stratified by 10-year age groups. Projected changes based on published age- and sex-stratified cross-sectional data were also calculated. Mean differences between the two methods were then estimated, along with the 95 % credible intervals of the differences.

Data were available for 5,569/9,423 (59.1 %) of the original cohort. Prospectively collected 10-year changes suggested that the four physically oriented domains declined in all but the youngest group of men and women, with declines in the elderly men exceeding 25 points. The four mentally oriented domains tended to improve over time, only showing substantial declines in vitality and role emotional in older women, and all four domains in older men. Cross-sectional estimates identified a similar pattern of change but with a smaller magnitude, particularly in men. Correspondence between the two methods was generally high.

Changes in HRQOL may be minimal over much of the life span, but physically oriented HRQOL can decline substantially after middle age. Although clinically relevant declines were more evident in prospectively collected data, differences in 10-year age increments of cross-sectional data may be a reasonable proxy for longitudinal changes, at least in those under 65 years of age. Results provide additional insight into the natural progression of HRQOL in the general population. 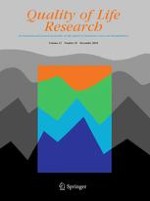 Physical activity and health-related quality of life: US adults with and without limitations