The purpose of the current study was to apply a single large longitudinal EQ-5D-3L data set to several national EQ-5D-3L value sets and explore differences in EQ-5D-3L index density functions and effect sizes before and after treatment.

Patients, surgically treated for lumbar spinal stenosis or lumbar disk herniation between 2007 and 2017, were recruited from the national Swedish spine register. A total of 27,328 procedures were eligible for analysis. The EQ-5D health states were coded to EQ-5D-3L summary indices using value sets for 9 countries: Argentina, Australia, Canada, China, Germany, Italy, Sweden, the UK, and the US. The EQ-5D-3L summary index distributions were then estimated with kernel density estimation. The change in EQ-5D-3L index before and after treatment was evaluated with the standardized response mean (SRM). 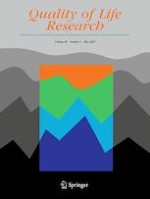 What is QOL in children and adolescents with physical disabilities? A thematic synthesis of pediatric QOL literature