The long-term value of coronary artery calcium (CAC) scanning has not been studied extensively in symptomatic patients, but was evaluated by us in 644 consecutive patients referred for stable chest pain.

We excluded patients with a history of cardiovascular disease and with a CAC score of zero. CAC scanning was done with a 16-row MDCT scanner. Endpoints were: (a) overall mortality, (b) mortality or non-fatal myocardial infarction and (c) the composite of mortality, myocardial infarction or coronary revascularisation. Revascularisations within 1 year following CAC scanning were not considered.

Risk increased with increasing CAC score. Patients with CAC >100 or ≥400 Agatston units were at increased risk of major adverse cardiac events and are eligible for preventive measures. CAC scanning provided incremental prognostic information to guide the choice of diagnostic and therapeutic options in many subjects evaluated for chest pain.
What’s new?
The coronary artery calcium (CAC) score provides a quantitative assessment of the overall atherosclerotic burden, a measure not readily available with other forms of testing. We studied the long-term prognostic value of CAC scanning in a consecutive series of 644 men and women with stable chest pain but without previous cardiovascular disease.
A graded relation was found between CAC score and prognosis. The increase in risk was graded, and thus with larger scores, the risk became higher.
Both CAC score >100 as well as ≥400 Agatston units were associated with an increased risk of mortality [relative risk (RR) 2.6, 95% confidence interval (CI) 1.2–5.5 and RR 4.6, 95% CI 2.1–9.5, respectively] as well as with the occurrence of other major cardiac events. This association was not modified by correction for type of chest pain and risk factors.
Subjects with CAC score ≥400 units, constituting about 25% of the patients, were at highest risk with a rate of death or myocardial infarction in the order of 3% per year and would qualify for preventive medical treatment. Subjects with a CAC score between 100 and 400 units should be considered for primary preventive measures given their increased mortality.
Thus, application of the CAC score provided relevant prognostic information in addition to the usual clinical risk characteristics in patients suspected of coronary artery disease, and its application could guide the subsequent choice of diagnostic and therapeutic options in many such subjects.

Conventional coronary angiography is the reference standard for the diagnosis of coronary artery disease (CAD), but its diagnostic yield is low [1]. This is not only true with regard to the actual diagnostic findings: many subjects undergoing coronary angiography exhibit findings that are considered normal. But the low return is also reflected in the lack of therapeutic consequences associated with the procedure. Only about 50% of abnormal diagnostic coronary angiographies in patients with stable chest pain are followed by revascularisation [2]. Coronary angiography using computer tomography (CTCA) has been suggested as an alternative and less invasive diagnostic technique. Still, randomised studies comparing CTCA with functional testing in suspected CAD found no differences in outcomes between these two approaches [3, 4].
The detection of coronary artery calcium (CAC) by non-contrast CT scanning could represent an alternative diagnostic and prognostic tool. The CAC score provides a quantitative assessment of the overall atherosclerotic burden, a measure not readily available with other forms of testing [5]. The CAC score has been shown to reliably predict events among various categories of subjects studied. Among asymptomatic subjects, CAC scanning improved prognostic classification [6]. In symptomatic individuals, the absence of CAC has been shown to identify subjects at low risk for cardiovascular disease (CVD) and cardiovascular events, precluding the need for further downstream testing [7].
The long-term worth of CAC scoring in patients with symptoms suggestive of CAD has not been studied extensively [8]. We therefore investigated the prognostic value of CAC scanning in a consecutive series of 644 men and women with stable chest pain.

From December 2004 to May 2011, patients consecutively referred for the evaluation of their chest pain underwent a CAC scan. Symptoms were classified as typical, atypical or non-specific. Patients with a history of CVD were excluded. Because previous research has shown that both the short- and long-term prognosis of patients with a CAC score of zero is excellent, such patients were excluded from the current analysis [7, 9].
The study complied with the Declaration of Helsinki and was approved by the local research ethics committee.

Hypertension was defined as systolic blood pressure >140 mm Hg and/or diastolic blood pressure >90 mm Hg, or treatment for hypertension. Dyslipidaemia was defined as total cholesterol >6.0 mmol/l or treatment for dyslipidaemia. Diabetes mellitus was diagnosed when haemoglobin A1c was ≥48 mmol/l, fasting plasma glucose >7.0 mmol/l, a random plasma glucose >11 mmol/l or when glucose-lowering therapy was used. Smoking was self-reported. Family history of premature CAD was defined as a history of myocardial infarction, percutaneous coronary intervention or revascularisation before age 60 years in a first-degree family member. Pre-test likelihood was determined on the basis of history, age and sex [10].

A 16-row MDCT scanner (Sensation 16 Siemens, Erlangen, Germany) was used to acquire a volume set of data of the heart according to standard spiral protocol. CAC was measured by the Agatston method (Calcium scoring, Wizard workstation, Sensation 16, Siemens). The CAC score was classified as 0.1–100, 100–400 and ≥400 Agatston units.

Survival was assessed in May 2016 by use of the national Civil Registry. Surviving patients received a questionnaire to collect information on cardiac events and procedures. Potential clinical events were adjudicated after review of pertinent hospital records. The date of the last known information from either source was used to calculate follow-up time. Five patients were lost to follow-up and excluded from analysis.

Categorical variables are presented as absolute numbers and frequencies and continuous variables as mean ± SD. Endpoints included: (a) overall mortality, (b) mortality or non-fatal myocardial infarction and (c) the composite of mortality, myocardial infarction or coronary revascularisation by either coronary artery bypass grafting or percutaneous coronary intervention. In the latter analyses, 70 early (occurring within 1 year after inclusion) revascularisations were censored to minimise verification bias. Log-rank tests were used to compare different curves. The Kaplan-Meier method was used to assess event-free survival for outcomes of interest. Cox proportional hazard models were employed to adjust the association of the CAC score and adverse cardiac outcome for potential confounders. SPSS software (version 24.0, SPSS Inc., Chicago, IL, USA) was used for statistical analyses.

We included 644 patients, 320 women and 324 men. Their mean age was 63 (range 35–88) years. Details of the study population are presented in Tab. 1. Based upon their type of chest pain, 13% of the patients had a low, 72% an intermediate and 15% a high pre-test likelihood of CAD. In the low pre-test likelihood group 12% of the patients showed a CAC score ≥400, compared to 33% in the high pre-test likelihood group.
Table 1
Baseline patient characteristics and clinical assessment
Data are n (%) or mean ± SD
CAD coronary artery disease; BP blood pressure; CAC coronary artery calcium
During a median follow-up of 8 (range 5–12) years, 58 patients died, while 22 others suffered a non-fatal myocardial infarction. In addition, 24 patients underwent coronary revascularisation after at least 1 year following their first clinical examination. Thus, 104 patients experienced the combined endpoint.

In 261 (41%) patients, the CAC score was between 0.1 and 100. A CAC score between 100 and 400 was found in 217 (34%) patients, and the CAC score was ≥400 Agatston units in 166 (26%) patients.
Cumulative 8‑year survival rate was 95% in patients with a low (<100) CAC score, 90% in patients with a CAC score between 100 and 400, and 82% in patients with a high (400 units or higher) CAC score. The survival of patients with a CAC score ≥400 was significantly (p < 0.01) lower than that of subjects with a lower score. The rate of the combined fatal and non-fatal events between the three groups of patients with varying degrees of coronary calcification was clinically relevant and statistically significantly different (Fig. 1).
×
In univariate analysis, a graded relation between CAC score and prognosis was found. Both CAC score >100 and ≥400 units were associated with increased risk of mortality [relative risk (RR) 2.6, 95% confidence interval (CI) 1.2–5.5 and RR 4.6, 95% CI 2.1–9.5, respectively] as well as with the occurrence of other cardiac events (Tab. 2). After correction for type of chest pain and risk factors, the associations between elevated CAC score and adverse events remained statistically significant for the combined endpoint. Other parameters associated with increased risk included higher age, male sex and positive family history of CAD.
Table 2
Unadjusted and adjusted association of coronary artery calcium score and adverse cardiac outcomes
RR relative risk; C confidence interval; MI myocardial infarction

By nature of the population studied, the number of fatal events in our study was quite small, and could have affected the power of the associations. In addition, the CAC score could have modified the diagnostic path, since an abnormal scan could have persuaded the physician to opt for coronary angiography and coronary revascularisation. However, this verification bias would have impacted mainly on the initial clinical course, and early coronary interventions were excluded from the current analysis. We did not investigate the effect of CAC scoring on downstream change of medication. This could have influenced outcome. In view of the favourable prognosis of patients with a CAC score of 0, these were excluded. Their inclusion would have increased the risk association of higher CAC scores with subsequent adverse cardiac events.

In summary, in this study of 644 consecutive patients, CAC scanning provided significant incremental information on their 8‑year prognosis. Patients with a CAC score <100 units had a favourable prognosis. Both patients with a CAC score >100 or ≥400 Agatston units had increased risk of MACE and are eligible for preventive measures. Thus, CAC scanning provided incremental prognostic information and could guide the subsequent choice of diagnostic and therapeutic options in many subjects evaluated for chest pain.

D. Rijlaarsdam-Hermsen received support through an unrestricted grant from the Bronovo Research Foundation, The Hague, The Netherlands. M.S. Lo-Kioeng-Shioe, D. Kuijpers, R.T. van Domburg, J.W. Deckers and P.R.M. van Dijkman declare that they have no competing interests.
Open Access This article is distributed under the terms of the Creative Commons Attribution 4.0 International License (http://​creativecommons.​org/​licenses/​by/​4.​0/​), which permits unrestricted use, distribution, and reproduction in any medium, provided you give appropriate credit to the original author(s) and the source, provide a link to the Creative Commons license, and indicate if changes were made.
vorige artikel Effect of body surface area and gender on wall thickness thresholds in hypertrophic cardiomyopathy
volgende artikel Lead detour
insite
INHOUD
share
DELEN 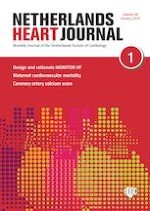 Correction to: Guidelines for the management of myocardial infarction/injury with non-obstructive coronary arteries (MINOCA): a position paper from the Dutch ACS working group