This study used latent variable mixture modeling (LVMM) with a combined sample of undergraduates and internet users who endorsed non-suicidal self-injury (NSSI; N = 440) to identify profiles of non-suicidal self-injurers. LVMM results revealed four distinct subtypes (“Experimental NSSI,” “Mild NSSI,” “Multiple Functions/Anxious,” and “Automatic Functions/Suicidal” groups) that were similar to those found in a prior study of undergraduates Klonsky and Olino (Journal of Consulting and Clinical Psychology 76:22-27, 2008), with an additional fifth “Multi-method.” ANOCOVAs and logistic regressions showed the first four groups differed on aspects of psychopathology in a similar fashion to the previous study. Specifically, the Experimental and Mild NSSI groups had the lowest levels of psychopathology, and the AF/Suicidal group had higher levels of psychopathology than the first three groups except for anxiety, which was higher for the MF/Anxious group. The additional Multi-method group was found to have higher levels of psychopathology than all other groups, but not significantly different from the MF/Anxious group. With regard to alcohol use and drinking motives, the MF/Anxious group had the highest level of hazardous drinking and drinking motives related to coping with depression and anxiety, enhancement, and conformity. The other four groups were not differentiated from one another on any drinking variable. Findings suggest that NSSI may be better conceptualized as a heterogeneous syndrome in clinical and research settings, with one sub-group being more at-risk for hazardous alcohol use.
vorige artikel Psychometric Evaluation of the Factor Structure of the Teasing Questionnaire – Revised (TQ-R)
volgende artikel The Cognitive Emotion Regulation Questionnaire: Factor Structure and Psychometric Properties of the Turkish Version 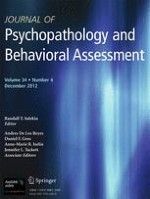 The Behavioural Inhibition Scale for Children Aged 3 to 6 (BIS 3-6): Validity Based on Its Relation with Observational Measures

Emotion Dysregulation and Emotional Impulsivity among Adults with Attention-Deficit/Hyperactivity Disorder: Results of a Preliminary Study