Private speech used by high-functioning children with autistic spectrum disorders (ASD) (n = 33) during two executive functioning tasks was compared to that of typically developing children (n = 28), and children with ADHD (n = 21). Children with ASD were as likely as others to talk to themselves and their speech was similarly relevant and likely to appear in moments of task difficulty. Unlike others, children with ASD were more likely to get items correct when they were talking than when they were silent. Group differences in performance were observed when children were silent but not when children were talking. Findings suggest that autistic children talk to themselves in relevant ways during problem-solving and that such speech is helpful in normalizing their executive performance relative to controls.
volgende artikel Development of a Video-based Evaluation Tool in Rett Syndrome 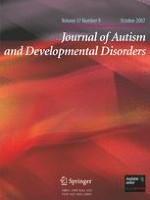 A Parent-Report Instrument for Identifying One-Year-Olds at Risk for an Eventual Diagnosis of Autism: The First Year Inventory