The use of psychotropics by categories and the reason for their prescription was investigated in a large scale study of 4,069 adults with ID, including those with autism spectrum disorder, in New York State. Similar to other studies it was found that 58 % (2,361/4,069) received one or more psychotropics. Six percent received typical, 6 % received typical, while 39 % received atypical antipsychotics. There was greater use of antidepressants (23 %), mood stabilizers (19 %), and antianxiety agents (16 %) relative to other studies. The use of anti-impulsives, stimulants and hypnotics was rare (1–2 %). Half of the psychotropics were prescribed for treatment of major psychiatric disorders, 13 % for control of challenging behaviors, and 38 % for both. Results indicated that the major psychiatric disorders, except anxiety disorder and autism, influenced the use of psychotropics and the number of medication used. These findings imply that although practitioners still rely too heavily on the use of antipsychotics in this population, there is a welcome shift in the prescription patterns relative to other studies. The practitioners appeared to use psychotropics primarily to treat diagnosed psychiatric disorders and not just to control aggressive behavior which suggests that evidence-based practice of psychiatry is playing an increasing role in the ID population. 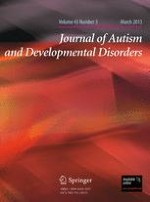 Improving Social Skills in Adolescents and Adults with Autism and Severe to Profound Intellectual Disability: A Review of the Literature

Parents’ Perspectives on Participating in Genetic Research in Autism