We estimated the prevalence of ASD in a population-based sample comprising children aged 3–12 years (N = 74,252) in Shanghai. This included a high-risk group sampled from special education schools and a low-risk group randomly sampled from general schools. First, we asked parents and then teachers to complete the Social Communication Questionnaire for participating children. Children who screened positive based on both parental and teachers’ reports were comprehensively assessed. ASD was identified based on DSM-5 criteria. We identified 711 children as being at-risk for ASD, of which 203 were identified as ASD cases. The prevalence of ASD was 8.3 per 10,000, which is likely an underestimate, given that 81.6% of the children diagnosed with ASD had IQs below 40. This is the first report on the prevalence of ASD according to DSM-5 in China. 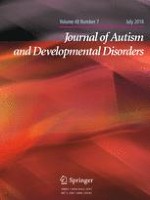 Identification of Symptoms of Autism Spectrum Disorders in the Second Year of Life at Day-Care Centres by Day-Care Staff: Step One in the Development of a Short Observation List

Allied Health Professionals’ Knowledge and Use of ASD Intervention Practices

Sex-Differences in Children Referred for Assessment: An Exploratory Analysis of the Autism Mental Status Exam (AMSE)

Brief Report: Impact of Challenging Behavior on Parenting Stress in Mothers and Fathers of Children with Autism Spectrum Disorders

Family Experiences with the Diagnosis of Autism Spectrum Disorder: System Barriers and Facilitators of Efficient Diagnosis