The prevalence of autism spectrum disorders has been steadily rising. In most parts of the world, rates as high as 1 % are reported, including in the United States. In Israel, previously reported prevalence rates have been in the 0.2 % range, and were based on parental reporting of diagnosis. In this study, records from one of the largest Israeli Health Maintenance organizations were used to calculate both incidence and prevalence of autism spectrum disorder (ASD) in Israel. Israeli prevalence of ASD was calculated at 0.48 % for 1–12 years olds and 0.65 % for 8 year old children in 2010, higher than previous Israeli reports, but still lower than prevalence estimates for the US. Incidence calculations ranged from 0.65 to 0.84 per 1,000 children for children 1–12 year olds. Reasons for these differences are suggested and discussed.
vorige artikel The Relationship between Sensory Sensitivity and Autistic Traits in the General Population
volgende artikel The Modality Shift Experiment in Adults and Children with High Functioning Autism 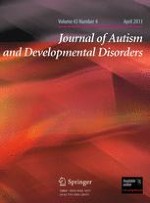 Fascination and Isolation: A Grounded Theory Exploration of Unusual Sensory Experiences in Adults with Asperger Syndrome

Can Bronchoscopic Airway Anatomy Be an Indicator of Autism?