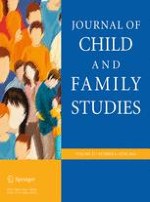 The Relation Between Parenting Stress, Locus of Control and Child Outcomes: Predictors of Change in a Parenting Intervention