This paper identifies factors that predict children’s use of counseling services within a 2-year period. Using two waves of data from a national survey of 1009 youth age 6–17, we describe differences in utilization by demographic characteristics and compare receipt of counseling between children who scored high versus lower on: (1) levels of mental health symptoms, (2) multiple victimization exposure; (3) levels of delinquency; and (4) parent–child conflict. Multivariate logistic regressions were also performed to examine the relative and independent effects of a these factors on receiving counseling. Results indicate that counseling was received by only one- quarter or less of the 10–17 year olds and one-third or less of the 6–9 year olds with the highest levels of symptoms, victimization or delinquency. For the 10–17 year olds, delinquency and parent–child conflict were better predictors of treatment than were mental health symptoms or victimization exposure. In contrast, younger children (age 6–9) were most likely to receive counseling if they lived in a single parent or stepfamily household. The findings suggest that more counseling should be made available to distressed and victimized children, particularly those who do not engage in high delinquency and conflict which tend to promote referral.
vorige artikel Mandated Community Service in High School and Subsequent Civic Engagement: The Case of the “Double Cohort” in Ontario, Canada
volgende artikel Working in High School and Adaptation in the Transition to Young Adulthood among African American Youth 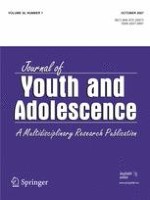 Engagement in after-school program activities: quality of experience from the perspective of participants