Predictors of quality of life in carers for people with a progressive neurological illness: a longitudinal study | mijn-bsl Skip to main content
ZOEKEN MENU 1 2 3 4

The aim of the present research was to determine the predictors of quality of life (QOL) among carers for people living with a chronic degenerative neurological illness, with comparisons of the differences in significant predictors of QOL between illness groups.

Psychosocial and economic variables were examined among 192 carers for people living at home with motor neurone disease, Huntington’s disease, multiple sclerosis, and Parkinson’s, over a twelve-month period, to determine their contribution to the prediction of carer QOL.

Mood was the only consistent predictor of carer QOL across groups; however, marital relationship satisfaction, social support satisfaction, income, and economic pressure significantly predicted carer QOL for at least one of the illness groups, in addition to mood.

The findings highlight the importance of recognising the varying roles that psychosocial and economic variables play on the prediction of carer QOL within each of these illness groups.
vorige artikel Effect of atomoxetine on quality of life and family burden: results from a randomized, placebo-controlled, double-blind study in children and adolescents with ADHD and comorbid oppositional defiant or conduct disorder
volgende artikel Self-rated health as a tool for estimating health-adjusted life expectancy among patients newly diagnosed with localized prostate cancer: a preliminary study 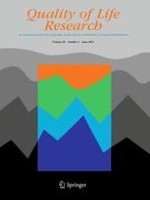 Measurement properties of the Community Wellbeing Index in older adults