To determine long-term predictors of health-related quality of life (HRQOL) and evaluate the treatment effect of highly active antiretroviral therapy (HAART) on HRQOL in the US Military HIV Natural History Study (NHS) cohort.

HRQOL was significantly affected by low CD4 count, medical and mental comorbidities. Addressing these modifiable factors would be expected to improve the physical and mental HRQOL of the cohort. Our study did not find any treatment benefit of NPI-HAART over PI-HAART on HRQOL in the long term.
vorige artikel Health-related quality of life after sleeve gastrectomy equal to Roux-en-Y gastric bypass patients?
volgende artikel Pain catastrophizing mediates the negative influence of pain and trait-anxiety on health-related quality of life in fibromyalgia 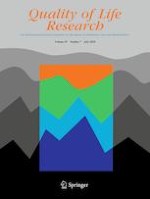 A moderated mediation model of perceived stress, negative emotions and mindfulness on fertility quality of life in women with recurrent pregnancy loss

Evaluation of quality of life and its influencing factors after transplantation of leukemia patients based on SF-36 score: a cohort study

Quality of life in people with epidermolysis bullosa: a systematic review