Whilst joint attention (JA) impairments in autism have been widely studied, little is known about the early development of gaze following, a precursor to establishing JA. We employed eye-tracking to record gaze following longitudinally in infants with and without a family history of autism spectrum disorder (ASD) at 7 and 13 months. No group difference was found between at-risk and low-risk infants in gaze following behaviour at either age. However, despite following gaze successfully at 13 months, at-risk infants with later emerging socio-communication difficulties (both those with ASD and atypical development at 36 months of age) allocated less attention to the congruent object compared to typically developing at-risk siblings and low-risk controls. The findings suggest that the subtle emergence of difficulties in JA in infancy may be related to ASD and other atypical outcomes.
vorige artikel Brief Report: Peculiar Evolution of Autistic Behaviors in Two Unrelated Children with Brachidactyly-Mental Retardation Syndrome
volgende artikel Brief Report: Impaired Differentiation of Vegetative/Affective and Intentional Nonverbal Vocalizations in a Subject with Asperger Syndrome (AS) 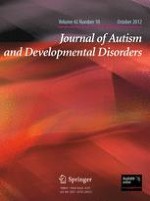