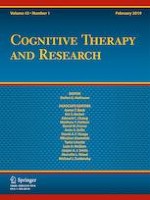 Innovations in the Study of Appraisals and PTSD: A Commentary

Cognitive Processes in Anxiety and Comorbid Physical Illness and Health Behavior: Introduction to the Special Issue

Editorial for the Special Issue on Negative Appraisals in Trauma: Current Status and Future Directions for Research