Post-treatment Lyme disease syndrome symptomatology and the impact on life functioning: is there something here? | mijn-bsl Skip to main content
TOOLBAR 1 2 3 4
ZOEKEN MENU 1 2 3 4

Sixty-three participants with erythema migrans and systemic symptoms were enrolled in a prospective cohort study. Participants underwent physical exams and clinical assessments, and completed the SF-36 (daily life functioning) and the Beck Depression Inventory, Second Edition (BDI-II) (depression), at each of five visits over a period of 6 months.

Signs of Lyme disease disappeared post-treatment; however, new-onset patient-reported symptoms increased or plateaued over time. At 6 months, 36% of patients reported new-onset fatigue, 20% widespread pain, and 45% neurocognitive difficulties. However, less than 10% reported greater than “minimal” depression across the entire period. Those with PTLDS (36%) did not differ significantly from those without with respect to demographics, pre-treatment SF-36, and BDI-II scores. Statistically significant differences were found over time on the Role Physical, Vitality, Social Functioning, Role Emotional, and Mental Health subscales (with a trend toward significance for the remaining three subscales of Physical Functioning, Bodily Pain, and General Health) of the SF-36 between those with an eventual PTLDS diagnosis and those without when measured at 6 months.

Unlike clinical signs of Lyme disease, new-onset symptoms are reported by a subset of participants without evidence of depressive symptomatology. Patients who developed PTLDS had significantly lower life functioning compared to those without PTLDS. We propose future avenues for researching infection-triggered symptoms resulting from multiple mechanisms. 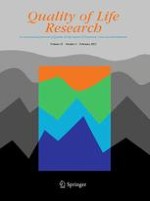 Measuring preference-based quality of life in children aged 6–7 years: a comparison of the performance of the CHU-9D and EQ-5D-Y—the WAVES Pilot Study