The interdependent adjustment of children and their parents following disasters has been well documented. We used the Actor-Partner Interdependence Model (APIM) to provide an appropriate analytical framework for examining how family members may contribute to each other’s post-disaster mental health. Independent self-reports were collected from parent–child dyads (n = 397) residing in a rural community in Indonesia that was devastated by a major earthquake. Elementary school children (M = 10 years; 51 % female) and one of their parents (M = 41 years; 73 % female) each reported on their disaster exposure, posttraumatic stress (PTS) symptoms, and general distress. The APIM was used to examine mental health within dyads and moderation by gender across dyads. Children reported lower disaster exposure and fewer PTS symptoms, but similar general distress levels, as their parents. Children’s and parents’ disaster-specific PTS symptoms were the strongest predictor of their own general distress. Parents’ PTS symptoms were associated with children’s general distress (b = 0.14, p < 0.001), but children’s PTS symptoms were not associated with parents’ general distress (b = −0.02, p > 0.05). Findings were not moderated by parents’ or children’s gender. Although children and parents may respond differently to natural disasters, they may be best understood as a dyad. APIM analyses provide new evidence suggesting a unidirectional path of influence from parents’ disaster-related symptomatology to children’s general mental health. Dyadic approaches to understanding mental health and treating symptoms of distress among disaster survivors and their families following trauma are encouraged. 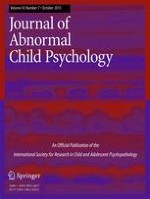