Positive and Negative Beliefs About Depressive Rumination: A Psychometric Evaluation of Two Self-Report Scales and a Test of a Clinical Metacognitive Model of Rumination and Depression | mijn-bsl Skip to main content
TOOLBAR 1 2 3 4
ZOEKEN MENU 1 2 3 4

The present study sought to investigate psychometric properties of the Positive Beliefs about Rumination Scale (PBRS) and the Negative Beliefs about Rumination Scale (NBRS), two self-report measures of metacognitive beliefs of depressive rumination, in patients with major depressive disorder (N = 179). Confirmatory factor analysis of the PBRS showed good fit of the hypothesized one-factor model. The previously proposed two-factor model of the NBRS was supported after implementation of some modifications. The scales showed adequate to good internal consistency and validity was supported on some indices. Finally, the metacognitive model of rumination and depression was tested by means of structural equation modeling. After implementation of some theoretically consistent modifications, the model provided a good fit to the data. Clinical implications of the findings, including the implementation of a metacognitive-focused cognitive therapy of depression, and suggestions for future research are discussed. 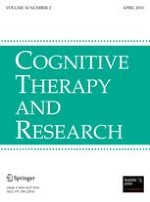