Response shift is a change in perceived HRQL that occurs as a result of recalibration, reprioritization, or reconceptualization of an individual respondent’s internal standards, values, or conceptualization of HRQL. In this commentary, we suggest that response shift may also occur at the population level, triggered by causes that affect the distribution of individual-level risk.

We illustrated the nature and consequences of potential population-level response shift with two examples: the September 11 terror attacks, and the recent denormalization of smoking.

Response shift may occur at the population-level, when a large proportion of the population experiences the shift simultaneously, as a unit, and when the cause of the response shift is a socially significant event or trend. Such catalysts are of a qualitatively different nature than the causes leading to health status changes among individuals, and speak to the determinants affecting the underlying distribution of risk in the population. 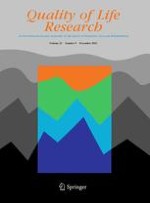 Understanding the health impact of caregiving: a qualitative study of immigrant parents and single parents of children with cancer