The online version of this article (doi:10.​1007/​s11136-010-9762-x) contains supplementary material, which is available to authorized users.
The EQ-5D is a copyrighted instrument, and all requests for using it should be sent to the EuroQol Executive Office in Rotterdam, the Netherlands (userinformationservice@euroqol.org).
Abbreviations
HRQoL
Health-related quality of life
NHSS
National Health Services Survey
MoH
Ministry of Health
VAS
Visual analogue scale
RMB
Ren Min Bi (Chinese currency)

China has been undergoing a period of rapid economic growth with dramatic social and political transitions since its market-oriented reforms were launched in the 1980s. On average, during the past 30 years, China’s GDP has grown by 9.4% per year, and the proportion of the population in absolute poverty has decreased from 31 to 3% [ 1]. Great achievements have been made in education, e.g. the literacy rate reached the same level as that of middle-income countries. But at the same time, disparities in education and income are increasing, and unemployment appeared with the collapse of state-owned enterprises [ 2]. The dramatic socio-economic transitions during the past decades have had major impacts on health: overall, the Chinese live longer and are healthier, average life expectancy increased from 67.9 years in 1981 to 72.5 years in 2008 [ 3], but health inequalities between groups with different educational levels, income and employment status are increasing [ 1, 4– 6]. Those inequalities are considered a serious problem and may impact heavily on the country’s future development. In order to reduce inequalities in health, a recent Government Report from the National Congress Meeting (Beijing, April 2009) set the following target for the health care reform: “By 2020, build a basic health care system that can provide safe, effective, convenient and affordable health services to urban and rural residents” [ 7]. Hence, measuring health, and its distribution among different sub-groups, would provide valuable information for policy-makers in their efforts to reduce inequalities in health.
Educational level, income and employment status are the socio-economic status indicators most commonly used [ 8, 9]. In China, studies on health inequalities have been carried out, focusing mainly on inequalities between rural and urban areas [ 10, 11], socio-economic inequalities [ 2, 4, 12– 14] and gender inequalities in health [ 15– 17].
Population health studies in China have mostly used mortality [ 14, 18], life expectancy [ 15] and usage of health care as health indicators [ 4, 18]. Mortality and life expectancy may not adequately reflect health and its development over time, because the disease pattern has changed from acute infectious diseases to chronic non-communicable diseases [ 19], and the proportion of persons living with ill-health has increased. Mortality measures do not take health status into consideration: while mortality decreases, the fraction of people living with ill-health might increase at the same time. The usage of health care does not necessarily reflect health status. Individuals with poor health tend to consume more health care, but on the other hand, those with poor health could not afford health care, especially in a country like China where health care is provided largely based on out-of-pocket payments.
The global self-rated health question—“How is your health today? Good, bad or in-between?”—is commonly used to obtain health status, also in China [ 12, 20]. However, this measure does not take the multi-dimensions of health into consideration.
Health-related quality of life (HRQoL) is a subjective account of health assessment, which reflects the multi-dimensions of health, such as physical, psychological, social, cognitive and role function, as well as general well-being [ 21]. In China, some studies are also based on HRQoL data [ 13, 17]. Numbers of instruments have been developed to measure HRQoL, but not all the instruments cover all these health dimensions [ 22]; for example, the EQ-5D does not include a cognitive dimension.
The EQ-5D instrument has been used for measuring population health status in many countries, in Europe and the USA, Canada and Zimbabwe, and population norms have been established by age, sex and socio-economic status [ 23– 31]. Norms data can be used to compare health status of specific groups with that of the general population.
There is an increasing interest in applying the EQ-5D instrument to Asia. Most studies are performed among patients, e.g. in Singapore [ 32], Japan [ 33], Bangladesh [ 34], Malaysia [ 35], South Korea [ 36], mainland China [ 37] and Thailand [ 38]. Studies have been performed among the general population in Japan [ 39], mainland China [ 40], Taiwan [ 41] and South Korea [ 42]. Studies among Chinese populations have also been performed in Singapore [ 32], the USA [ 26, 43] and Canada [ 44]. An EQ-5D study in Beijing was performed among 2,994 individuals from one district [ 40]. The results suggested that EQ-5D is valid for measuring health status in the Chinese population.
In 2008, for the first time, the EQ-5D was included in the National Health Services Survey (NHSS) to measure population health status in all 31 provinces in mainland China.
The aim of the study was to measure and analyse national EQ-5D data and to provide norms for the Chinese general population by age, sex, educational level, income and employment status.

Data were derived from the 2008 National Health Services Survey (NHSS), which has been organised by the Chinese Ministry of Health (MoH) every fifth year since 1993. The surveys were carried out from mid-June till mid-July, and face-to-face interviews were conducted by trained local interviewers [ 45]. The NHSS 2008 questionnaire includes more than 200 questions, on acute diseases and injuries, chronic and other diseases, hospitalisation, health-related behaviour, educational level, family income and employment status, social relations, safety and security, medical care fees, accessibility (distance and time) and satisfaction with health service, insurance coverage, vaccination and disease control, woman and child health services. In 2008, the EQ-5D was included for the first time.
In NHSS 2008, 56,400 households were sampled using a multi-stage stratified cluster random sampling [ 46]. In the first sample stage, 2,400 counties were stratified based on socio-economic, health care and population structure to sample 94 counties. In the second stage, 2,350 streets (urban area) and townships (rural area) in the 94 counties were stratified based on population size and income per capita to sample 470 streets and townships. In the third stage, 940 residential committees (urban area) and villages (rural area) were sampled using the same criteria as in the second stage. In each residential committee or village, 60 households were randomly selected, and all family members in a sampled household were interviewed individually. EQ-5D was asked among persons aged 15 years and over, and no upper-age limit was applied. However, the instrument can be used in younger age groups, and the newly developed child-friendly version of the EQ-5D, named EQ-5D-Y [ 47, 48], is available in some language versions, but not yet in Chinese. Hence, persons aged under 15 years were not included in this study.
In total, 177,501 respondents were included in NHSS 2008. Of these, about 18% aged below 15 years were excluded, since EQ-5D questions should only be administered to respondents aged 15 years and over. Respondents not answering the questions by themselves were excluded (13%). In total, less than 2% of the respondents had missing answers on age, sex, in at least one of the EQ-5D dimensions, on VAS or reported VAS higher than 100. After applying the previous exclusion criteria, 120,703 respondents were included in this study.
Ethical permission was granted by the Regional ethics committee, Stockholm, Sweden, for analyses of this study (Dnr: 2009/1892–31).

The highest accomplished educational level was classified into below primary school, primary school, junior middle school, senior middle school, college and above. An individual’s annual income was assessed by dividing household annual income by the numbers of persons living in the family within the last half-year, regardless of age and employment status. Respondents were then ranked from lowest to highest by their annual income and divided into five groups of equal size: the lowest income group had an income below 2,500 RMB; the second group from 2,500 to 3,999 RMB; the third group from 4,000 to 5,999 RMB; the fourth group from 6,000 to 9,999 RMB; the fifth and highest income group 10,000 RMB and above. Employment status was categorised into employed, unemployed, student and retired.

The EQ-5D instrument is a generic HRQoL outcome measure [ 23] that classifies respondent’s present-day health status in five dimensions (mobility, self-care, usual activities, pain/discomfort and anxiety/depression); each dimension is represented by one question with three severity levels (no problems, some problems and severe problems). The EQ-5D instrument in total defines 243 health states.
A visual analogue scale (VAS) was used in the survey, with anchor points 0 (worst health state) and 100 (best health state). The scale consisted of a horizontal line where every 10th was marked and labelled 0, 10, 20,…, 100. The question was framed: “On the scale please point out which point best represents your own health state today.” The scale was harmonised to fit in the NHSS questionnaire and hence slightly differs from the EQ VAS.

Data were entered at the provincial level, two persons independently entered the same data using a software provided by the MoH, and disagreements were checked and corrected. Each province reported the data to MoH, where data were cleaned and a national data set was created.
All descriptive analyses by socio-economic status and by clinical characteristics were performed stratified by age and sex. Age groups 15–44 years, 45–64 years and 65+ were used for age categorisation. Calculations of percentage of respondents reporting problems in each EQ-5D dimension, VAS score (mean) and multiple regression analyses were performed in SAS 9.1 [ 49]. To test the statistical significance of the difference between groups in the percentage of reported problems, χ 2 tests were used. Multiple regression analyses were used to estimate how VAS scores varied with age, sex, educational level, income group and employment status. Dummy variables were created for 5-year age groups except for the oldest, 85–103 years. Dummy variables were created for educational level, income group, employment status and clinical characteristics. In order to keep the observation number the same in all the models, dummies for missing values were entered for each categorisation, except for missing in diagnosed with chronic disease within last 6 months due to the low missing number ( n = 2). A 5% significance level was used for all analyses.

Health-related quality of life by age group and sex

Table 4
Percentage of respondents reporting moderate or severe problems in each EQ-5D dimension [χ 2 tests were performed, and for each age group, respondents in the first income group (low) were used as reference group. All results were statistically significant except those shaded ( P<0.05)], VAS score (mean), by income group, age group and sex, China 2008

Unemployed persons reported more problems in all EQ-5D dimensions and had lower mean VAS scores than those who were employed (online resource, Table 5). The differences in health between different socio-economic groups increased with age. Percentage of problems in each dimension for the age group 45–64 years is presented in Fig.  1. The mean VAS score for unemployed men was 74.0 compared with 79.5 for employed men. Corresponding figures for women were 74.1 and 77.2, respectively.
×

Variation in VAS score controlling for other factors

We would like to thank the Ministry of Health in China for data collection and their support of data analysis work. We acknowledge financial support from the Swedish Research Council (Swedish Research Links programme 348-2009-6538). We are also grateful for the helpful comments and suggestions received on earlier versions of this paper from the Equity and Health Policy Research Group, Department of Public Health Sciences, Karolinska Institutet, at the 26th EuroQol Plenary Meeting in Paris in 2009, at the 7th World Congress of Health Economics (iHEA) in Beijing in 2009, at the 16th Annual Conference of the International Society for Quality of Life Research (ISOQOL) in New Orleans in 2009, and from the Health Economics Research Group, Medical Management Centre, Karolinska Institutet. We would also like to thank three anonymous reviewers and the editor, for their valuable comments and constructive suggestions. 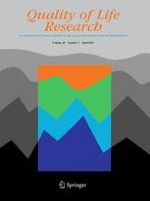