Attention-deficit/hyperactivity disorder (ADHD) is a highly heritable neurodevelopmental disorder that is known to have a polygenic (i.e., many genes of individually small effects) architecture. Polygenic scores (PGS), which characterize this polygenicity as a single score for a given individual, are considered the state-of-the-art in psychiatric genetics research. Despite the proliferation of ADHD studies adopting this approach and its clinical implications, remarkably little is known about the predictive utility of PGS in ADHD research to date, given that there have not yet been any systematic or meta-analytic reviews of this rapidly developing literature. We meta-analyzed 12 unique effect sizes from ADHD PGS studies, yielding an N = 40,088. These studies, which included a mixture of large population-based cohorts and case–control samples of predominantly European ancestry, yielded a pooled ADHD PGS effect size of rrandom = 0.201 (95% CI = [0.144, 0.288]) and an rfixed = 0.190 (95% CI = [0.180, 0.199]) in predicting ADHD. In other words, ADHD PGS reliably account for between 3.6% (in the fixed effects model) to 4.0% (in the random effects model) of the variance in broadly defined phenotypic ADHD. Findings provide important insights into the genetics of psychiatric outcomes and raise several key questions about the impact of PGS on psychiatric research moving forward. Our review concludes by providing recommendations for future research directions in the use of PGS, including new methods to account for comorbidities, integrating bioinformatics to elucidate biological pathways, and leveraging PGS to test mechanistic models of ADHD.
vorige artikel Family Processes and Child Psychopathology: A Between- and Within-Family/Child Analysis
volgende artikel Early Development of Comorbidity Between Symptoms of ADHD and Anxiety 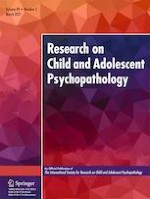 Bullying Victimization and Developmental Trajectories of Internalizing and Externalizing Problems: The Moderating Role of Locus of Control Among Children

Family Processes and Child Psychopathology: A Between- and Within-Family/Child Analysis