This study examined verbal mediation during planning in school-age children with autism spectrum disorder (ASD) relative to age- and nonverbal IQ- matched typically developing peers using a dual-task paradigm. Analyses showed no group differences in performance. However, in the condition intended to disrupt verbal mediation, language skills were associated with planning performance for the TD group, but not the ASD group. Upon examining ASD subgroups with versus without comorbid structural language impairment, children with ASD and normal language appeared to rely on verbal mediation to a greater degree than children with ASD and language impairment, but to a lesser degree than TD peers. Thus, the role of verbal mediation in planning for children with ASD differs depending on language status.
vorige artikel Social Camouflaging in Females with Autism Spectrum Disorder: A Systematic Review
volgende artikel Autonomic and Electrophysiological Evidence for Reduced Auditory Habituation in Autism 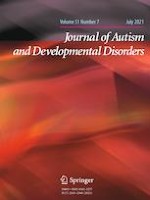 Distributional Properties and Criterion Validity of a Shortened Version of the Social Responsiveness Scale: Results from the ECHO Program and Implications for Social Communication Research

Effects of an Inclusive Physical Activity Program on the Motor Skills, Social Skills and Attitudes of Students with and without Autism Spectrum Disorder