Spanish-speaking Latinas have some of the lowest rates of meeting physical activity guidelines in the U.S. and are at high risk for many related chronic diseases. The purpose of the current study was to examine the maintenance of a culturally and individually-tailored Internet-based physical activity intervention for Spanish-speaking Latinas. Inactive Latinas (N  =  205) were randomly assigned to a 6-month Tailored Physical Activity Internet Intervention or a Wellness Contact Control Internet Group, with a 6-month follow-up. Maintenance was measured by assessing group differences in minutes per week of self-reported and accelerometer measured moderate to vigorous physical activity (MVPA) at 12 months after baseline and changes in MVPA between the end of the active intervention (month 6) and the end of the study (month 12). Potential moderators of the intervention were also examined. Data were collected between 2011 and 2014, and were analyzed in 2015 at the University of California, San Diego. The Intervention Group engaged in significantly more minutes of MVPA per week than the Control Group at the end of the maintenance period for both self-reported (mean diff. = 30.68, SE = 11.27, p = .007) and accelerometer measured (mean diff. = 11.47, SE = 3.19, p = .01) MVPA. There were no significant between- or within-group changes in MVPA from month 6 to 12. Greater intervention effects were seen for those with lower BMI (BMI × intervention = −6.67, SE = 2.88, p = .02) and lower perceived places to walk to in their neighborhood (access × intervention = −43.25, SE = 19.07, p = .02), with a trend for less family support (social support × intervention = −3.49, SE = 2.05, p = .08). Acculturation, health literacy, and physical activity related psychosocial variables were not significant moderators of the intervention effect during the maintenance period. Findings from the current study support the efficacy of an Internet-delivered individually tailored intervention for maintenance of MVPA gains over time. 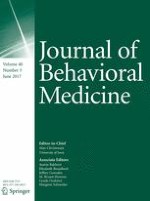 The closer ‘We’ are, the stronger ‘I’ am: the impact of couple identity on cancer coping self-efficacy

Psychometric evaluation of the Condom Barriers and Motivations Scale (CBMS)

Mediators of change in screen-time in a school-based intervention for adolescent boys: findings from the ATLAS cluster randomized controlled trial