Endothelial dysfunction precedes coronary artery disease (CAD) and can be measured by peripheral arterial tonometry (PAT). We examined the applicability of PAT to detect a low risk of CAD in a chest pain clinic.

Chest pain is a common symptom that may be caused by obstructive coronary artery disease (CAD) and requires risk stratification to assess the probability of CAD [1]. Risk algorithms have been developed based on combinations of risk factors [2, 3]. However, these models tend to overestimate the prevalence of CAD [4], and are based on population calculations rather than a direct assessment of the atherosclerotic process within an individual. Diagnostic testing with exercise electrocardiography (X-ECG) is considered to be highly discriminative [5], however is often inconclusive. Alternative tests using pharmacological stress are usually not immediately available. Computed tomography (CT) is expanding in the workup [1], using coronary calcium scoring (CCS) [6] and computed tomographic angiography (CTA) [7]. However, there are associated disadvantages such as costs, radiation exposure and administration of contrast agent [8]. Therefore, a better discrimination of patients at low risk of clinically relevant CAD will facilitate more efficient use of subsequent diagnostics.
Endothelial dysfunction precedes and contributes to the atherosclerotic disease process. Peripheral arterial tonometry (PAT) has emerged as an easy, noninvasive test to study endothelial function at the fingertip [9, 10]. From one single PAT measurement both the reactive hyperaemia index (RHI), indicating endothelium-dependent vasodilation [11], and the augmentation index (AIx), indicating arterial stiffness [12], can be derived. RHI and AIx have shown to be altered in the presence of CAD [12‐15], and can be used in CAD risk stratification [16]. However, although PAT appears promising in research settings, validation in the clinical setting beside conventional measures has only been limited [11]. Therefore, the objective of this cross-sectional study was to assess the applicability of PAT to detect low risk of clinically relevant CAD in unselected patients visiting a rapid-access outpatient chest pain clinic.

From September 2009 to February 2010, 93 consecutive patients with new onset stable chest pain without evidence of ongoing ischaemia and no prior history of CAD gave written consent to undergo finger plethysmography to measure PAT at the same time as their chest pain evaluation, after study approval by the Medical Ethics Committee. The sample size was comparable with previous PAT validation studies [11, 12, 16], and sufficiently large to observe discriminating tendencies [17]. There were no exclusion criteria. All patients were scheduled to undergo conventional diagnostics. Based on cut-off values of these diagnostics, patients at low risk of clinically relevant CAD were identified. This was verified by evaluating revascularised patients by percutaneous coronary intervention (PCI) or coronary artery bypass grafting (CABG) for up to 1 year.

Cardiovascular risk factors were summarised using the HeartScore risk algorithm [3] to assess the risk of 10-year mortality of CAD and the Diamond and Forrester model (DF) [2, 4] to assess the pretest probability of CAD.

A non-enhanced CT scan was performed to assess the amount of coronary calcium, followed by a contrast-enhanced scan to assess plaque burden and presence of stenotic CAD. Image acquisition was conducted using a 128-slice dual-source CT (Siemens Flash, Forchheim, Germany). Coronary arteries were quantitatively evaluated per coronary segment for presence of atherosclerotic plaque and > 50 % stenosis [7]. CCS and total number of plaques and stenoses per patient were included in the analysis.

The PAT response was measured with the EndoPAT 2000 device (Itamar Medical Ltd., Caesarea, Israel), according to a standardised protocol allowing simultaneous determination of both RHI and AIx. An index of pulse wave amplitude at rest and during reactive hyperaemia resulted in RHI, a measure of endothelium-dependent vasodilation [9‐11, 13, 16]. Augmentation of the central pulse pressure allowed determination of AIx, representing endothelium-dependent arterial stiffness [12, 18].

Summary data are presented as numbers (proportion) or expressed as mean ± standard deviation or median (interquartile range). In case of non-normal distribution, data were logarithmically transformed before analysis. Correlations between RHI, AIx and conventional diagnostics were analysed using Pearson’s correlation coefficient. Differences between two groups were assessed by t-testing. The predictive value of RHI and AIx for revascularisation was analysed using logistic regression and described as odds ratio (OR) with corresponding 95 % confidence interval (CI). Two-tailed p < 0.05 was considered significant.

The present study examined the applicability of PAT-derived RHI and AIx to identify patients at low risk of clinically relevant CAD. The most important findings were (i) that although RHI and AIx correlated weakly with CAD risk estimates, (ii) both RHI and AIx were not related with X-ECG or CT-imaged parameters. (iii) Most importantly, low risk based on conventional diagnostics showed non-discriminative RHI and AIx outcomes. (iv) Finally, both RHI and AIx failed to predict revascularisation within 1 year.

(i) We confirmed the modest relation of RHI with traditional risk factors, as reported previously [13]. AIx showed a weak correlation with the pretest probability of CAD. Patvardhan et al. [12] reported a strong association between AIx and age, most likely the basis for this correlation. (ii) No significant differences in either RHI or AIx were observed based on X-ECG outcome. This is remarkable since X-ECG is considered to be highly discriminative in patients at risk of obstructive CAD [5], and also RHI has shown to be able to discriminate between presence or absence of CAD [11]. Indeed, ischaemic X-ECG outcomes were more frequently present in revascularised patients of the present study whereas RHI was non-discriminative, making an independent relation likely. In addition, RHI and AIx did not significantly correlate with CCS, in contrast to a prior study of selected patients [19]. Han et al. [20] also showed no association between coronary endothelial dysfunction and calcification, reflecting that both can represent separate disease stages. In addition, brachial AIx was not independently associated with CCS [21], supporting our results. Indeed, other vascular function tests have previously indicated that endothelial dysfunction may represent an independent response in the progression of CAD, whereas a relation with the development of atherosclerosis exists [22‐26]. RHI and AIx were not significantly associated with CTA-imaged plaque or stenosis. This is contrary to previous studies with imaged CAD describing specific subgroups with proven CAD [11, 12], diabetes [14], or women [15] although the presence of CAD was not verified with CTA in any of them. (iii) Also, RHI and AIx were not able to differentiate low risk of clinically relevant CAD, in contrast to results in selected populations [11, 12, 16], complicating comparison with our unselected population. (iv) Finally, RHI and AIx failed to predict revascularisation within 1 year, contrary to Rubinshtein, who showed that RHI independently predicted revascularisation [27]. Also radial AIx predicted revascularisation [28], although for digital AIx no such studies exist to our knowledge. However, again selected patients were evaluated with adverse events occurring at long-term follow-up, which is difficult to compare with our 1-year evaluation. Indeed, patient selection may strongly influence outcome because specific risk factors have additional effects on the measurement itself besides on the CAD process, as highlighted by the study of Gargiulo [14].

In spite of the pathophysiological basis of endothelial dysfunction in CAD and the promising results with PAT in selected populations under controlled conditions, we found no evidence to support PAT as a diagnostic tool to detect low risk of clinically relevant CAD in an unselected outpatient population.

The article is dedicated to Professor Dr. W.J. van der Giessen who sadly passed away on 6 June 2011.

The present study was funded by the Erasmus Medical Center as a pilot study.

None reported.
Open Access This article is distributed under the terms of the Creative Commons Attribution License which permits any use, distribution, and reproduction in any medium, provided the original author(s) and the source are credited.
vorige artikel Atherosclerosis at your fingertips?
volgende artikel Acute myocardial infarction in the elderly
insite
INHOUD
share
DELEN 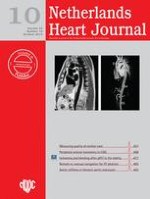 Atherosclerosis at your fingertips?