Restricted and repetitive behaviors in autism spectrum disorders have been conceptualized to reflect impaired executive functions. In the present study, we investigated the performance of 6–17-year-old children with and without an autism spectrum disorder on a dimension-change card sort task that explicitly indicated sorting rules on every trial. Diagnostic groups did not differ in speed of responses after the first rule switch or in speed or accuracy on blocks with mixed versus single sort rules. However, performance of the ASD group was significantly slower and less accurate overall than the typically-developing group. Furthermore, within the ASD group, poorer DCCS task performance did not predict more severe autism symptoms. Implications for the executive dysfunction theory of autism are discussed.
vorige artikel Stimulus Characteristics Affect Humor Processing in Individuals with Asperger Syndrome
volgende artikel Maternal Cortisol Levels and Behavior Problems in Adolescents and Adults with ASD 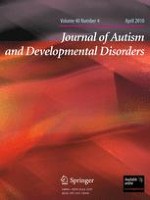 A Report on the Journal

Julia Moor: Playing, Laughing and Learning with Children on the Autism Spectrum: A Practical Resource of Play Ideas for Parents and Carers (Second Edition)

Erratum to: Evaluation of Comprehensive Treatment Models for Individuals with Autism Spectrum Disorders