Using the World Health Organisation criteria of 2001 (systolic blood pressure ≥140 mmHg and/or a diastolic blood pressure ≥90 mmHg), 34% of adult men and 30% of women in the Netherlands suffer from hypertension [ 1]. This prevalence increases strongly with age in both men and women.
Treatment of hypertension remains suboptimal. Despite the availability of numerous safe and effective pharmacological therapies, the percentage of patients achieving adequate blood pressure control to guideline target values remains inadequate. The Julius Centre for Health Sciences and Primary Care in Utrecht recently reported that among patients with hypertension, only 33.7% were aware of the condition. Of those aware patients, only 59.4% were treated. Of those patients treated, 41.9% had blood pressure at or below the advised level [ 2]. Frequent failure of the pharmacological strategy to attain adequate blood pressure control can be attributed to both physicians’ negligence as well as patient non-compliance to a lifelong pharmacological therapy for a mainly asymptomatic disease. Thus, the development of new approaches for the management of hypertension, especially those that could help overcome these issues, is a priority. These considerations are especially relevant to patients with drug-resistant hypertension and/or patients with severe intolerance to medication. The exact prevalence of therapy-resistant hypertension is not exactly known, but cross-sectional studies suggest that it affects approximately 10–15% of patients being treated for hypertension by primary care physicians [ 3].
Renal sympathetic efferent and afferent nerves, which lie within and immediately adjacent to the wall of the renal artery, are crucial for initiation and maintenance of systemic hypertension. Radical surgical methods for sympathetic denervation have been successful in lowering blood pressure in severely hypertensive patients. However, these methods were associated with high perioperative morbidity and even mortality and also long-term complications [ 4]. Recently, a percutaneous, catheter-based approach using radiofrequency energy (RF) was developed to disrupt renal sympathetic nerves. This resulted in no severe (long-term) vascular or renal injury. Importantly, catheter-based renal nerve ablation was associated with a significant reduction in both systolic and diastolic blood pressure on top of maximal medical therapy, which persisted throughout 12 months follow-up in the first-in-man study [ 5]. The Symplicity HTN-2 Trial was recently published, which was the first randomised controlled study using this technique of renal denervation, confirming the findings of the first-in-man study [ 6].
Here, we report the results of the first Dutch experience regarding this novel treatment modality.

Patients were eligible if they have an office systolic blood pressure of 160 mmHg or more, despite being treated with at least three antihypertensive drugs, or confirmed intolerance to medication. Blood pressure measurements were performed in a seated position in at least two subsequent visits in both arms. Blood pressure check was performed before intervention and at 1 month follow-up.
Also, renal function and changes in neurohumeral factors were obtained during follow-up.
The renal artery anatomy was considered suitable in case of a vessel diameter of ≥4 mm, no prior renal angioplasty/stenting and no significant stenosis or other abnormalities.
Exclusion criteria for this treatment modality were pregnancy, age below 18 years, patients with any known secondary cause of hypertension and a glomerular filtration rate estimated at <45 mL/min/1.73 m². Also, patients with type 1 diabetes, haemodynamically significant valvular disease, implantable cardioverter defibrillators, or who are on treatment with clonidine, moxonidine, rilmenidine, or warfarin, were excluded from intervention.

Patients were pretreated with diazepam 5 mg and midazolam 1 mg. Using local anaesthetics, cannulation of the femoral artery was performed using the standard Seldinger technique. An 8Fr sheath was introduced and unfractionated heparin was given using an intravenous bolus of 1000 IE/kg bodyweight with a target activated clotting time (ACT) >250 s. Using an 8Fr renal double curve (RDC) or left internal mammary artery (LIMA) renal guiding catheter and a 5Fr soft tip straight delivery catheter, a steerable catheter with radiofrequency energy electrode tip was delivered into the renal artery. Before treatment, a starting dose of fentanyl 50 μg was given. A bilateral treatment of the renal arteries was performed with the use of series of 2-minute RF energy deliveries along each artery, aiming at 4–6 treatment points per artery (approximately 8 Watts of energy per treatment point). These treatment points are made with a minimum of 5 mm distance in between and with a pullback from distal to proximal in a circumferential way. A control angiography was performed after the procedure. Also, in a subset of three patients, intravascular ultrasound (IVUS) was performed.

Our first experience with renal sympathetic denervation, using a percutaneous approach, confirms the results of the previous proof-of-principle and recent randomised study, showing the safety and efficacy of this new treatment modality in daily clinical practice for patients with therapy-resistant hypertension [ 5, 6].
The decrease of blood pressure achieved in our patient population is comparable with that achieved in the previous studies and most likely will be clinically relevant, although current guideline target values were not met in our patients with extreme hypertension (baseline blood pressure 200/106 mmHg)[ 7]. A recent meta-analysis by Law et al. showed that irrespective of the type of medication used, the incidence of coronary heart disease events was reduced by 22% after a systolic blood pressure reduction of 10 mmHg or a diastolic blood pressure reduction of 5 mmHg. Even more, the incidence of stroke was reduced by 41% [ 8]. Assuming that the effects of renal denervation are as effective in reducing clinical events as a pharmacological approach for the treatment of hypertension, the observed blood pressure reduction of 25/12 mmHg in our patients will most likely be highly beneficial.
The efficacy of this new treatment option should not only be present in the short term, but particularly during long-term follow-up. Several patients treated with this new technique are now approaching the 2-year follow-up, and the blood pressure reductions observed appear to be sustained over this period, suggesting the absence of nerve fibre recovery, nerve fibre regrowth, or development of counter-regulatory blood pressure–elevating mechanisms [ 9].
Besides efficacy, safety remains an equally important issue in a therapy for (secondary) prevention of disease. No adverse events were noted in our first patients periprocedurally and/or at follow-up. In the first cohort study performed in a multicentre setting, no renal artery stenosis occurred as verified using follow-up renal magnetic resonance angiogram at 6 months [ 5]. Among all patients treated worldwide, a local dissection without sequelae was noted during the procedure in 2 patients, a few access site bleedings were reported, but no (long-term) side effects have been published up till now [ 6]. Particularly, no change in renal function has been noted.
There is accumulating preclinical and clinical evidence compelling for a primary role of renal sympathetic activation in the pathogenesis of hypertension as described in recent review articles [ 10, 11]. A crosstalk between the central nervous system and the kidneys is present (Fig.  2). Blocking sympathetic nerves leading to the kidney (‘efferent’) will reverse fluid and salt retention. By blocking sympathetic nerves emanating from the kidney (‘afferent’), renal denervation may also decrease the stimulation of other parts of the sympathetic nervous system, such as the heart and blood vessels, leading to an additional antihypertensive effect.
×
The earliest insight into the influence of intervention of the sympathetic nerve activity on renal function in hypertension is that of Claude Bernard in 1859 [ 12]. He observed that by cutting the greater splanchnic nerve, he caused an increased diuresis, whereas electrical renal sympathetic nerve stimulation produced a reduced diuresis. However, the surgical approach of (non-specific) renal denervation coincided with severe side effects as observed in studies from the 1930 s using surgical denervation of the sympathetic system of the thoracico-lumbar region and has therefore been abandoned [ 13, 14]. Using the catheter-based renal denervation in patients as described in this paper, we may have overcome these side effects of non-specific denervation of the lumbar region [ 15].
Pathophysiological proof of concept of the denervation of the renal artery has also been shown in a small subset of patients [ 16, 17]. Schlaich et al. demonstrated that the so-called norepinephrine spillover resulted in a decrease of 40–50%, which was accompanied by halving of renin activity and an increase in renal plasma flow. In our population, only a decrease in aldosterone was shown. Most likely, because of the small size of the population, no uniform effects of the intervention could be shown on the neurohumeral level in our population. Moreover, it was shown that microneurography at baseline and at follow-up showed a reduction in muscle sympathetic-nerve activity to normal levels [ 17].
For future therapeutic application of sympathetic denervation of the renal arteries, further research is needed to identify groups of patients who might benefit from this intervention. In this light, searching for efficacy in patients with, for instance, chronic kidney disease, patients with heart failure, diabetes and obesity will be interesting. Also, studies in milder forms of essential hypertension should be the next goal of research using this percutaneous technique. Hereby, hard endpoint studies are warranted to prove the value of this new percutaneous technique in daily clinical practice.

We thank the nurses of the Department of Cardiac Catheterization for their cooperation. Especially, Mathilde Hissink and Marijke van der Linde have contributed to the success of implementation of the program. 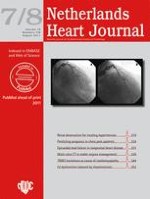 The role of multi-slice computed tomography in stable angina management: a current perspective