Perceptions of parents of the impact of autism spectrum disorder on their quality of life and correlates: comparison between mothers and fathers | mijn-bsl Skip to main content
ZOEKEN MENU 1 2 3 4

To compare mothers and fathers perceptions of the impact of autism spectrum disorder on their Quality of Life (QoL), we used the Parental-Developmental Disorders-Quality of Life scale (Par-DD-QoL).

The perception of QoL of mothers and fathers was compared for 130 pairs of parents of children with ASD and the associated variables were investigated.

Our finding that the perceived impact of ASD on QoL differed between mothers and fathers argues for individualized psychosocial support. Moreover, the strong correlation between the child’s clinical characteristics and the perception by parents of a higher impact of ASD on QoL should be seen as red flag concerning the needs of the parents in terms of social and educational support.
Trial registration number: NCT02625116 (October 2015).
vorige artikel “I don’t take for granted that I am doing well today”: a mixed methods study on well-being, impact of cancer, and supportive needs in long-term childhood cancer survivors
volgende artikel Measuring health-related quality of life in young children with physical illness: psychometric properties of the parent-reported KIDSCREEN-27 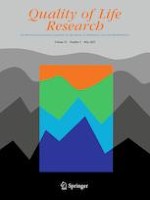 Psychopathology and health-related quality of life as patient-reported treatment outcomes: evaluation of concordance between the Brief Symptom Inventory (BSI) and the Short Form-36 (SF-36) in psychiatric outpatients

The QALY is ableist: on the unethical implications of health states worse than dead

Is malnutrition a determining factor of health-related quality of life in hemodialysis patients? A cross-sectional design examining relationships with a comprehensive assessment of nutritional status