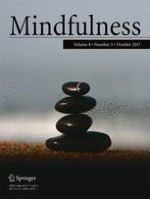 Too Early to Tell: The Potential Impact and Challenges—Ethical and Otherwise—Inherent in the Mainstreaming of Dharma in an Increasingly Dystopian World

Inflexible Youngsters: Psychological and Psychopathological Correlates of the Avoidance and Fusion Questionnaire for Youths in Nonclinical Dutch Adolescents