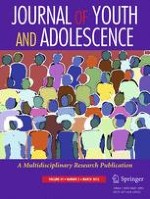 Loneliness, Stress, and Social Support in Young Adulthood: Does the Source of Support Matter?

Loneliness and Attitudes Toward Aloneness in Adolescence: A Person-Centered Approach