This study examined the relations between 8–12-year-olds’ perceived attachment security to father, academic self-concept and school performance in language mastery. One hundred and twenty two French students’ perceptions of attachment to mother and to father were explored with the Security Scale and their academic self-concept was assessed with the French adaptation of the Self Perception Profile. Students’ grade point average in language mastery was obtained from teachers and their reading performances were evaluated with a written word identification test. Attachment to father was found to be the only significant predictor, among attachment variables, of children’s grade point average in language mastery even after controling for sex, age and cognitive performance. Finally, results confirmed the mediating role of academic self-concept in the relation between attachment to father and grade point average in language mastery.
vorige artikel Child Sleep Problems and Parental Depression: Testing a Risk and Resistance Model
volgende artikel An Approach to Examining the Proximal and Intermediate Outcomes of an Intensive Family Preservation Program 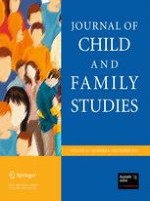 Treating Childhood Anxiety in Schools: Service Delivery in a Response to Intervention Paradigm