This longitudinal investigation examined interactions between aggression and peer victimization during middle childhood in the prediction of arrest through the adult years for 388 (198 boys, 190 girls) study participants. As part of an ongoing multisite study (i.e., Child Development Project), peer victimization and aggression were assessed via a peer nomination inventory in middle childhood, and juvenile and adult arrest histories were assessed via a self-report questionnaire as well as review of court records. Early aggression was linked to later arrest but only for those youths who were rarely victimized by peers. Although past investigators have viewed youths who are both aggressive and victimized as a high-risk subgroup, our findings suggest that the psychological and behavioral attributes of these children may mitigate trajectories toward antisocial problems. 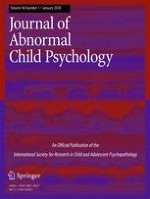 The Influence of Static and Dynamic Intrapersonal Factors on Longitudinal Patterns of Peer Victimization through Mid-adolescence: a Latent Transition Analysis

Bidirectional Associations between Peer Victimization and Functions of Aggression in Middle Childhood: Further Evaluation across Informants and Academic Years

Interpretation Bias Training in Depressed Adolescents: Near- and Far-Transfer Effects