Physical attacks, social manipulation and verbal victimization are the most frequent and disturbing acts of aggression in schools. Acts of both victimization and bullying [1‐3] are found and have extensive parallels: each consists of negative actions that occur repeatedly and over a longer period of time, carried out by one or more individuals, with the intention of inflicting harm either by direct (verbal/physical attacks) or indirect action (exclusion from the group). In accordance with Olweus [4], the terms “victimization” and “bullying” do not apply when two persons of approximately the same strength are fighting or quarrelling with each other. Notably, peer-victimization is especially prevalent in the elementary school years, with a mean rate of victimization of 23% of students across five urban cities [5].
The stability of victimization is relatively high, and it was shown that victimization exerts negative effects on children’s development [6]. Repeated peer-victimization leads to a chronic state of stress, endangering children’s healthy development [7]. Peer-victimization was shown to contribute to internalizing symptoms, such as anxiety, depression, and low-self-esteem [8], as well as to externalizing problems, such as aggression, disruptiveness, and other provocative behavior symptoms [9‐11].
Despite the well-documented association between peer-victimization and maladaptive development [12], not all peer-victimized children are at increased risk for developing mental health problems. Some children seem to be resilient against victimization despite exposure to a high-risk environment, a phenomenon called ‘adaptive success’ [13]. To explain adaptive success, protective factors like social support have to be considered [14]. Protective factors are processes that interact with risk factors in reducing the probability of negative outcomes [15‐17]. Thus, the same factors that have protective effects under certain circumstances may not be protective under different conditions. Understanding the processes that protect adolescents from maladaptive development and identifying these factors might be useful for developing more effective intervention strategies for peer-victimized children. According to the literature, parental as well as school support play protective roles in adolescent development:

The quality of parent-adolescent relations is a widely cited factor shown to protect children despite adverse environments [18, 19]. Supportive parent–child relationships, as measured by parental warmth, supervision, support and involvement, were found to reduce externalizing behavior. Thus, positive family resources coincide with an absence of behavioral problems, whereas an adverse family climate is a main negative contributor to mental health problems in general [20].

Attachment to school was shown to relate to better physical health, to lower levels of smoking and drinking, and to higher participation in extracurricular activities [21, 22]. Hill and Madhere [23] found teacher support to increase socially competent behavior in the classroom. Furthermore, it can be supposed that school support can compensate for a lack of parental support, possibly also protecting against the impacts of risk factors like peer-victimization.
Gender and age are further factors moderating the relationship between risk factors and the development of adolescents. According to Luthar and colleagues [24, 25], the construct of resilience is not unidimensional or stable across multiple contexts, but refers to adaptation to and engagement within specific environmental contexts. A longitudinal study by Hanish and Guerra [10] revealed that gender and age differences must be considered when predicting the severity of peer-victimization consequences like externalizing, internalizing and social problems. More recently, Seiffge-Krenke [26] showed that gender differences exist in the quality and frequency of peer-victimization. Furthermore, gender-linked vulnerabilities in the association of victimization and maladjustment have been found [27‐29]. Gorman-Smith et al. [30] showed that male adolescents were protected against violence exposure in positively interacting families. For these reasons, whether protective factors exert different effects within the context of victimization in female versus male adolescents should be investigated.
Thus, the aim of this study was to investigate (1) the frequency of peer-victimization in female and male adolescents and its association with mental health problems. Specifically, the objective was to investigate whether (2) peer-victimized adolescents are protected from developing mental health problems by parental and school support. We expected peer-victimization to be associated with poor mental health, while parental and school support were considered to act as buffers against developing problems. In addition, we assessed whether adolescents, across the demographic contexts of gender and age, benefit similarly from the protective factors in question. The impact of age was considered, as it may be assumed that the studied protective factors act differently in middle school versus senior high school students (3). Finally, effects of peer-victimization on mental health problems were compared with normative data in order to obtain additional information about clinically relevant psychopathology.

The sample consisted of 986 subjects, 513 females (mean age = 14.68 years, SD = 1.64) and 473 males (mean age = 14.69 years, SD = 1.65).
The study was conducted in seven public secondary schools in Frankfurt, Germany. Schools were chosen to represent all different school types in Germany (Hautpschule, Realschule, Gymnasium, Gesamtschule). The grade levels included ranged from 7 to 11, encompassing children from 11 to 18 years of age. In this study, adolescents aged 11–14 years were defined as middle school students and adolescents aged 15–18 years as senior students. The survey was approved by the administrative school boards as well as by the administrations of the participating schools. Students’ parents were informed about the study and had to return a consent form for their child to participate. In total, the rate of participation was 80% due to a lack of parental consent or absence on the day of testing for the remaining 20% of students. Before starting the assessment, students signed assent forms in which confidentiality was ensured. Students completed the survey in class on a regular school day. Trained administrators assisted the students during completion of the survey.

Data were collected using the Social and Health Assessment (SAHA), a survey originally developed by Weissberg et al. [31] and modified by Schwab-Stone et al. [32, 33]. The SAHA has been approved by the Yale University Institutional Review Board. The survey assesses adolescents’ attitudes towards school, family and high-risk behavior as well as emotional and behavioral problems. The German translation followed established guidelines and was developed by two bilingual interpreters. Back translations, which were compared with the originals, were made by an independent interpreter. Likert-type scale totals were obtained by averaging individual item scores.
SAHA scales used in this study: For mental health problems, the Strengths and Difficulties Questionnaire (SDQ) was used, a 25-item behavioral screening questionnaire for 4- to 16-year-olds [34]. In several representative samples, it was shown that the SDQ is as suitable as the Child Behavior Checklist [35] for identifying mental health problems in children [36, 37]. Respondents were asked to rate the occurrence of various psychopathology symptoms within the last six months. Five subscales of five items each assess protective and problem behavior: prosocial behavior, hyperactivity and attention problems, emotional problems, conduct problems and problems with peers. Items assessing behavioral problems are added up to generate a total score (20 items). Since our study as well as prior studies [37] showed that psychometric properties of the total SDQ scale are more satisfactory than SDQ subscales (Cronbach’s alpha = .48–.68), the total scale was used to investigate the effects of peer-victimization on general mental health problems. Cronbach’s alpha for the total SDQ scale in our German sample is .75. For middle school students, we were able to compare the effect of peer-victimization on mental health problems with normative data. These normative data and clinically relevant cut-offs for the SDQ self-report form were obtained by Meltzer et al. [38] from a representative sample of 11- to 15-year-old adolescents. In our study sample, significant mental health problems were judged to be present if adolescents’ total SDQ score was more than 1.5 standard deviations above the mean score of typically developing children.

Description of the Sample

Demographic characteristics of the final sample are presented in Table 1. Students did not differ significantly concerning school form. The majority of students (70%) had married or remarried parents, and the rate of unemployment in this study sample was 14.9% in fathers. The ethnic composition of the final sample was predominately non-German (Germany: 44.4%, Turkey: 16.8%, Eastern Europe: 11.0%, Africa: 5.2%, Asia: 9.7%, America: 0.3%, other European countries: 9.2%, unknown: 3.4%). As these figures show, 55.6% of students reported an immigrant background, an accurate reflection of the local public school population.
Table 1
Demographic characteristics of the study sample

Frequency of Peer-Victimization and Its Association with Mental Health Problems

In this study, we assessed the frequency and effects of peer-victimization on adolescents’ maladjustment. Specifically, we investigated whether peer-victimized adolescents are protected from developing mental health problems by parental and school support.

Frequency of Peer-Victimization and Its Association with Mental Health Problems

Results of this study clearly support the argument that peer-victimization places adolescents at serious risk for maladjustment. This finding is consistent with previous research [6, 8, 12]. With regard to normative data [38], in the present study the SDQ level of 10- to 14-year-old peer-victimized girls lies more than one standard deviation above the mean of a representative control sample (N = 2135), indicating that emotional well-being and behavior are profoundly affected.
In 15- to 18-year-old adolescents, however, we found that female students as well as male students are at high risk for developing mental health problems if parental support is low. Although one might have expected that the moderating effect of parental support attenuates with age, our results contradict this assumption. Parental support seems to be more necessary for 15- to 18-year-old male adolescents than for 11- to 14-year-old adolescents. It can be hypothesized that for male middle school students, other protective factors might be more effective than parental support, e.g., support from good friends [43]. Future research is necessary to address this aspect.

As a cross-sectional design was employed in the present study, a clear direction of effects cannot be inferred. This must be the object of additional longitudinal studies. There are some further limitations of this study that have to be discussed as well. The assessed measures give only a limited scope of information as all data were obtained by adolescent self-report. A more objective result could have been achieved if additional data had been obtained from teacher and parent reports of protective factors. However, it must be assumed that refusal of study participation would have been higher if teacher and parent ratings had been assessed in addition to self-reports. Thus, the strength of this study is its large number of participating students. Furthermore, since the level of mental health problems was related to normed population measures, stronger conclusions and greater generalizability regarding the effects of peer-victimization are possible.
Finally, although the sizes of the interaction effects were not large in magnitude, even small effects may affect public health substantially [43, 44], especially given the high prevalence of adolescents being peer-victimized.
In sum, this study represents progress in elucidating the relation between peer-victimization and mental health problems. Results clearly showed that peer-victimization is strongly associated with clinically relevant mental health problems and that protective factors like parental or school support might protect against the negative effect of peer-victimization. Increased knowledge about the processes of parental and school support from studies such as this contribute to both the effectiveness of intervention efforts and the promotion of supportive systems that create safer places for adolescents to develop and thrive.
Since the effect of peer-victimization can be offset by parent and school support, educational interventions must be considered. At the level of the classroom unit, social competence training might be helpful, first, to interrupt negative group dynamic processes in the classroom and school environment and second, to train students to better cope with physical and verbal attacks or social manipulation. Since especially vulnerable or young students frequently become targets of peer-victimization [45], integrating social competence training in school settings might be an effective and necessary strategy to prevent or reduce the effects of peer-victimization. Furthermore, our findings support the idea that a positive school climate and teachers supportive of their students are as necessary as parental support, especially in senior high school students, in protecting adolescents against peer-victimization. 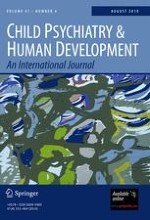 Internalizing and Externalizing Personality Dimensions and Clinical Problems in Adolescents

Cyberbullying Among Adolescents: The Role of Affective and Cognitive Empathy, and Gender

Locus of Control and Self-Efficacy: Potential Mediators of Stress, Illness, and Utilization of Health Services in College Students