Research has identified links between dating and aversive behavior such as aggression and bullying in adolescence, highlighting the need for studies that further our understanding of romantic relationships and their dynamics during this period. This study tested the associations between dating popularity and overt and relational aggression, social preference, and peer popularity. Of particular interest were the moderating roles of social preference and peer popularity in the association of aggression with dating popularity. Further moderation by gender was also explored. Participants were 478 ninth-graders (48 % girls) with peer nomination scores for peer status, aggression, and dating popularity. Dating popularity was positively correlated with popularity, social preference, and overt and relational aggression. Regression models indicated that popular, overtly aggressive girls were seen as desirable dating partners by their male peers. Relational aggression was associated with dating popularity for both boys and girls, especially for youths who were well-liked by peers. These findings are interpreted in light of developmental–contextual perspectives on adolescent romantic relationships and Resource Control Theory.
vorige artikel Does Age of Onset of Risk Behaviors Mediate the Relationship Between Child Abuse and Neglect and Outcomes in Middle Adulthood?
volgende artikel Stressful Life Events and the Perpetration of Adolescent Dating Abuse 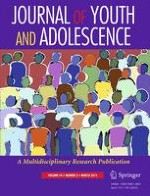 Spanking and Children’s Externalizing Behavior Across the First Decade of Life: Evidence for Transactional Processes

Effects of After-School Programs with At-Risk Youth on Attendance and Externalizing Behaviors: A Systematic Review and Meta-Analysis