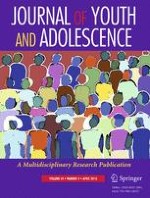 Rumination and Overgeneral Autobiographical Memory in Adolescents: An Integration of Cognitive Vulnerabilities to Depression

At-Risk Depressive Symptoms and Alcohol Use Trajectories in Adolescence: A Person-Centred Analysis of Co-Occurrence