This study examined concurrent and longitudinal associations between peer deviance, parenting practices, and conduct and oppositional problems among young girls ages 7 and 8. Participants were 588 African American and European American girls who were part of a population-based study of the development of conduct problems and delinquency among girls. Affiliations with problem-prone peers were apparent among a sizeable minority of the girls, and these associations included both males and females. Although peer delinquency concurrently predicted disruptive behaviors, the gender of these peers did not contribute to girls’ behavior problems. Harsh parenting and low parental warmth showed both concurrent and prospective associations with girls’ disruptive behaviors. Similar patterns of association were seen for African American and European American girls. The findings show that peer and parent risk processes are important contributors to the early development of young girls’ conduct and oppositional behaviors. These data contribute to our understanding of girls’ aggression and antisocial behaviors and further inform our understanding of risk processes for these behaviors among young girls in particular.
volgende artikel A Common Genetic Factor Explains the Covariation Among ADHD ODD and CD Symptoms in 9–10 Year Old Boys and Girls 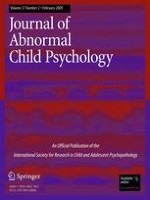